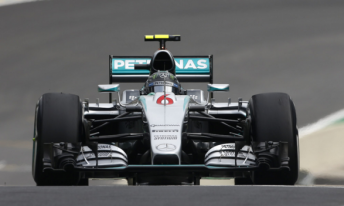 The battle for pole was once again fought between the two Mercedes drivers with Rosberg just edging his world champion team-mate Lewis Hamilton by 0.078s.

Rosberg was never headed in the final segment of qualifying as he went on to score the 21st pole of his F1 career.

Sebastian Vettel emerged as the best of the rest for Ferrari with the four-time world champion half a second adrift of Rosberg.

Williams’ Valtteri Bottas posted the fourth fastest time but a three place grid penalty for overtaking under red flags in Friday practice will see him drop to seventh.

The Finn’s penalty will promote fellow countryman Kimi Raikkonen to fourth ahead of Force India’s Nico Hulkenberg and the Red Bull of Daniil Kvyat.

Meanwhile, local favourite Felipe Massa will start alongside his Williams team-mate on the fourth row in eighth.

Aided by a upgraded Renault power unit, Daniel Ricciardo could only manage to post a time good enough for ninth, but a 10 place grid penalty for an engine change will see him occupy 19th on the grid.

Sauber’s Felipe Nasr was on course for a top 10 grid slot before stewards issued the Brazilian a three place grid penalty and two penalty points on his licence for impeding Massa on a flying lap.

As a result, Toro Rosso’s Max Verstappen and Carlos Sainz will complete the top 10, with Nasr relegated to 13th behind Force India’s Sergio Perez and Sauber’s Marcus Ericsson.

The Lotus duo of Romain Grosjean and Pastor Maldonado struggled for pace in 14th and 15th, with the former spinning on a vital flying lap.

McLaren’s woes continued as Jenson Button failed to progress to Q2 in 16th, while Fernando Alonso was unable to post a time when a mechanical issue saw him come to a halt on circuit.

The Manor pair of Alex Rossi and Will Stevens will start from 17th and 18th virtue of Ricciardo’s grid penalty and Alonso’s troubles.