Ogier looking for eighth win of the year

Sebastien Ogier looks on-course to finish the World Rally Championship season in style as he extended his lead on the second day of Wales Rally GB.

The Volkswagen driver won four special stages through mid-Wales’ windy and rain-soaked forests to increase his lead over Britain’s Kris Meeke’s Citroen to 35.7sec with a short day to come.

Ogier steadily stretched his advantage through the morning, but briefly lost the lead after stopping behind Thierry Neuville’s crashed Hyundai i20 which was blocking the road in the first pass through the treacherously muddy Dyfnant test.

Officials viewed his onboard video footage before crediting him with the time for which he was stationary and the Frenchman was back at the top.

“It’s been a very long day,” acknowledged Ogier. “It was tough for me this morning, because my thoughts were completely elsewhere after learning of the tragic events in Paris. That made it difficult to concentrate on the rally, but I took the decision to carry on and try to win for everybody we lost last night.

“Conditions weren’t easy, with a lot of rain and some very slippery stages, but we had a good run and stayed out of trouble and here we are.”

Meeke delivered an error-free day. He refused to risk all in pursuit of the three-time world champion, focusing instead on banking points for Citroen in its tussle with Hyundai for the runners-up slot in the manufacturers’ championship.

He headed Andreas Mikkelsen by 24.7sec. The Norwegian punctured and broke his Polo R’s rear right damper after hitting a hole in the morning, but won two stages to keep alive his slim hopes of securing second in the drivers’ championship.

Mads Ostberg, Ott Tanak and Dani Sordo fought for fourth. Ostberg twice had control of the position in a DS 3 but a puncture and a trip into a ditch sent him tumbling to eighth. Sordo took advantage, but a gearchange glitch and a brush with a barrier allowed Tanak ahead, despite a spin.

The Estonian’s Ford Fiesta RS headed Sordo’s i20 by 14.7sec, with Hayden Paddon completing the top six despite a gearshift problem and a head-on collision with Martin Prokop after both took the wrong route on a liaison section. Prokop’s Fiesta was too damaged to continue.

“I think there’s been an improvement over yesterday which a positive to take forward,”said Paddon.

“I’m still struggling a bit with confidence and to really read to the conditions right, that’s our biggest worry at the moment – simply trying to read the changeable grip. I’m not really adapting enough. We know what work on and we’ll try work on it tomorrow.

“We’ve got a big fight on our hands to try and keep Elfyn Evans behind us. It’s quite close so it’s going to be a big fight and we’ll try our best to keep him behind.” 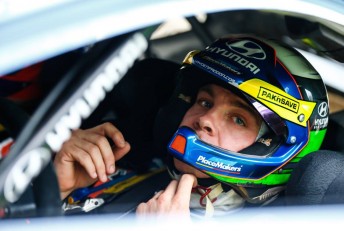 Elfyn Evans was only 4.4sec behind Paddon, with Stephane Lefebvre and Robert Kubica completing the leaderboard behind Ostberg, the Pole overcoming a broken driveshaft.

Jari-Matti Latvala endured his second retirement in two days with a broken driveshaft while Neuville, who was fastest in the opening two stages, will not restart after his roll.

The final leg features four stages and 36.43km of action. Two forest tests are followed by the spectacular asphalt challenge around the rocky Great Orme headland, with the repeated live TV Brenig Power Stage completing the event and season.