Aaron Seton on his way to victory

Third-generation racer Aaron Seton has furthered his promising career by taking out the Class B title in the Porsche GT3 Cup Challenge at Sydney Motorsport Park.

The result proved the highlight from a tricky day for competitors at the Shannons Nationals meeting as intermittent rain hit the Western Sydney venue.

It was a call by rival Jaxon Evans to start the second of three races on wet tyres that played heavily in Seton’s favour.

Evans had beaten Seton to the Class B win in Race 1, but trailed eight places behind at the end of the second heat as the track proved too dry for the grooved rubber.

A fine drive from Seton to second in class behind Sam Walter in the final was enough for the son of V8 Supercars Hall of Famer Glenn Seton to claim the crown.

“It been great racing with Jaxon this year; it’s been really close and we’ve been pushing each other all year,” said Seton of his fellow teenager.

“I can’t thank Scott Taylor Motorsport enough for this opportunity and obviously Jaxon for the great battle.

“Fortunately, we had the weather fall our way in race two with our tyre selection and it played our way.”

In the outright battle, Ryan Simpson had entered the weekend with an unassailable lead and promptly won the opening two heats to equal Matt Kingsley’s record of nine straight victories.

Dylan O’Keeffe then chimed in with the first triumph of his career in the final, leading home round winner Simpson by under 0.5s.

Geoff Emery did enough to secure the Elite Class title in his first Porsche season after switching from the Dunlop Series.

In the Kumho V8 Touring Car Series, Eggleston Holden driver Liam McAdam moved a step closer to the title with victory in the opening heat.

Rival and pole-sitter Alex Rullo had led the early stages of the wet race, but dropped to third with an off at Turn 2 on lap 4.

Tony Evangelou ran has high as second early before being forced to pit with damage from opening lap contact with McAdam. 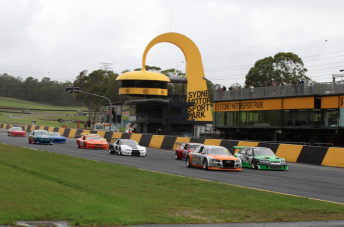 Perkins and Randle lead the Sports Sedan field to Turn 1

The Audi driver fended off Thomas Randle’s Saab at the end of a race that saw drivers having to preserve their wet tyres on a drying track.

Third allowed Tony Ricciardello to extend his series lead over Steven Tamasi, who finished seventh, to 15 points, while Randle closed to within 32 of the lead.

Muston brought out the Safety Car on lap 12 when his car stopped on the circuit, handing the lead to Paddon.

Oliver Smith went on to take second ahead of Kim Burke at the end of the 22 laps.

Muston had won the morning’s nine lap sprint over Burke, Paddon and Smith.

Series leader Mark Laucke could only manage eighth from the nine finishers, allowing Adam Cranston to draw level at the top of the series standings.

Dylan Thomas’ CXC Global entry made it an all-Mitsubishi front-row, with Beric Lynton’s BMW 1M the best of the rest in third.