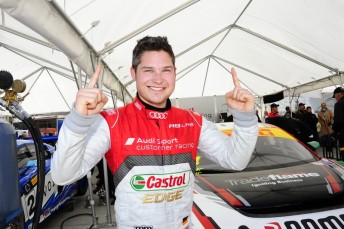 The factory Audi driver, partnered by Ryan Millier, came through to finish the first 60 minute race in fourth, which ultimately proved enough for the German to claim the title at the New Zealand circuit.

“I can’t believe I won the Australian GT Championship I’m so happy for the entire team, but I want to dedicate this championship to all in France (referring to the mass shooting in Paris overnight),” said Mies.

The McLaren 650S duo dominated the opening stint before losing the lead to the Kiwi pair of Graeme Smyth and Jono Lester, who took advantage of a Safety Car as their pit stop loomed.

The race was neutralised when title rival Nathan Antunes and pole-sitter Christopher Haase collided at Turn 2. 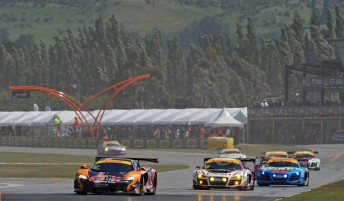 Meanwhile, at the front Lester, who took over from Smyth, inherited the lead after the mandatory pit stops but he was unable to relax with van Gisbergen chasing the Ferrari 458 down.

In the end, van Gisbergen won his dice with his fellow countryman to secure victory for the Darrell Lea McLaren squad.

Lester held on to finish second ahead of the Max Twigg/Shae Davies Erebus Mercedes SLS GT3 in third.

“The car was fantastic and Klark did really well to bring it home for us to take the round win. This puts us in a good mind-set for the 101 (feature race) tomorrow,” said van Gisbergen.

Tony Walls and Warren Luff finished seventh in the Objective Racing McLaren 650S ahead of the returning Roger Lago in the JBS Lamborghini.

The final championship race of the season saw Morgan Haber fend off a hard charging Craig Baird to score a breakthrough win in the Erebus Motorsport Mercedes SLS GT3.

Van Gisbergen and Tander headed the early stages of the race although a strong drive throughout saw Haber emerge in the lead once the pit stops had been completed.

Haber’s surge to the front came following a Safety Car period when second placed Millier and Tony Quinn made contact which saw the former issued with a drive-through penalty.

The penalty released Baird, in the Scott Taylor Motorsport Porsche, to pursue Haber for the lead in a tension filled climax. 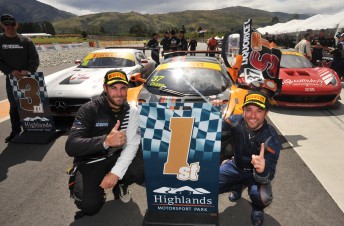 Shane van Gisbergen and Klark Quinn were victorious in Race 1

However, Haber refused to buckle as he went on take the win from Baird and the Lester/Smyth Trass Ferrari.

Klark Quinn and van Gisbergen secured the round victory in fourth ahead of D’Alberto and Denyer in the #88 Maranello Ferrari, with Lago in sixth.

The Haase/Steve McLaughlan Audi suffered a drive shaft failure, while the Ross Stone Racing Aston Martin failed to start Race 2 after suffering a power steering issue in the opening encounter.

Qualifying for Sunday’s Highlands 101 non championship feature race begins at 1010 with the race scheduled to begin at 1320 local time.