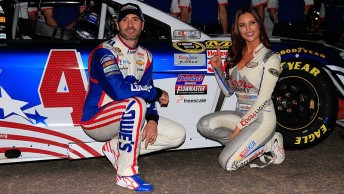 Johnson scored his first pole of 2015

Jimmie Johnson might not be in the fight to win his seventh NASCAR title, but that again has not held him back as he took his first pole of the year, coming at the penultimate race of the season at Phoenix.

“Qualifying has never been my sweet spot, so it was good to get one this year,” said Johnson.

“Everyone at Hendrick Motorsports has worked hard to get better. We’re trying to get every trophy we can and have a little fun.”

Championship contender Kurt Busch will share the front row, while Johnson’s teammate, Dale Earnhardt Jr. will start third alongside another title contender Carl Edwards. Martin Truex Jr., who is also in the championship fight, rounded out the top five.

Team Penske teammates Joey Logano and Brad Keselowski, who both need a victory to advance to the Championship 4 at Homestead next weekend, were the lowest-qualifying Chase contenders in 14th and 18th respectively.

The other title contenders were in far better positions with Kevin Harvick in eighth, Kyle Busch in 10th, while the only driver locked into the Final 4, Jeff Gordon, will start from 11th.

VIDEO: Johnson talks about his pole

Previous Story Johnson leaves it late to win in Texas