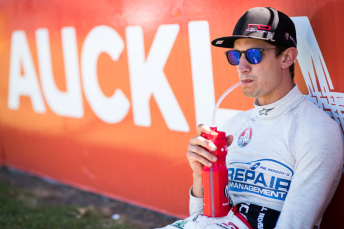 Nick Percat may be on the sidelines in a week’s time at Phillip Island due to complications from a foot injury sustained at last month’s Castrol Gold Coast 600.

After competing in pain at Pukekohe last weekend, Percat has spent most of this week in a Melbourne hospital, where an infection was discovered.

A statement issued by the team this afternoon says that the squad is hopeful Percat will recover in time to race in the season’s penultimate event.

“The infection is associated with an injury the Bathurst winner sustained at the Gold Coast 600 when an exhaust header on his Repair Management Australia Commodore broke, causing the heat to increase in the foot well and burn Percat’s right foot,” read the statement.

“After having the injury examined as a precautionary measure, an infection was identified and is subsequently being treated in a Melbourne hospital.

“Percat has been in hospital most of the week, and after showing signs of recovery expects to be discharged early next week with every intention of racing.”

“Our focus and concern is for Nick’s health and his recovery, but we will give him every chance to drive his #222 Commodore at Phillip Island,” Dumbrell said.

“We have a contingency plan in place if Nick is not well enough, but our preference will always be to have him race.

“Our thoughts are with Nick and we hope he will be putting his race suit and joining us at the Island.”

Percat stressed his desire to be fit for Phillip Island via Twitter.

“Been laying low in hospital all week but aiming to leave early next week and be at Phillip island.

“I’ll try keep you updated, fingers crossed the weekend goes well for the foot and I’m steering the @LD_Motorsport car at PI.”