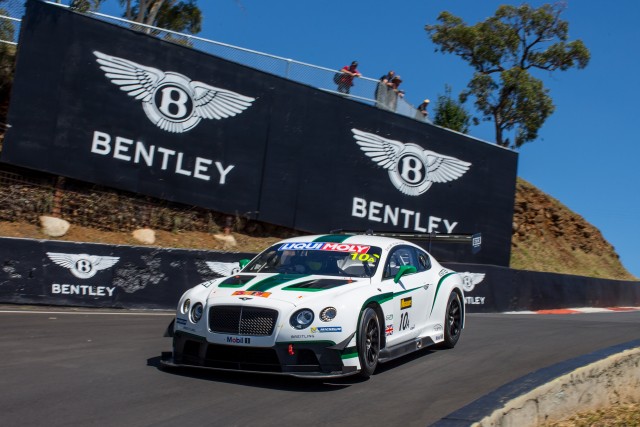 Bentley finished fourth on its Bathurst 12 Hour debut this year

The iconic British marque will return to Australia’s international endurance race after scoring a fourth place finish on its Mount Panorama debut this year.

Run by the renowned M-Sport operation, Bentley has committed to a two-car assault while a third Continental GT3 run by HTP Motorsport may also join the grid.

“Bathurst has become more prominent on the endurance calendar and with the change in administration we are looking forward to having good race there,” Bentley’s director of motorsport Brian Gush told Speedcafe.com.

“As GT3 has grown all over the world I think it has added the spice to Bathurst to make it a really iconic event on the calendar.

“It is a big expense and you don’t take these decisions lightly but we have every faith the event will be good for us.

“We have got a lot data now with regards to set-up and how the track changes. This year we were going in quite new to it and we took a lot of advice from people we knew.

“We should be able to approach it now with a lot more in our pocket.”

The team is yet to disclose its driver line up for the event although it is expected to announce a similar roster to this year.

Bentley fielded factory drivers Guy Smith and Steven Kane alongside British GT star Matt Bell, who took up the unseeded seat in the #10 entry back in February.

Bentley was in contention for the outright victory this year before being overhauled in the closing stages for the lead by the factory Nissan, which went on to win the race.

Contact at the final corner of the last lap with the Craft Bamboo Racing Aston Martin saw the Bell/Kane/Smith entry fall to fourth at the chequered flag.

After a disappointing end to the race, Gush says Bentley has unfinished business at Bathurst.

“Any race that we haven’t won is unfinished business in our eyes. Every race we enter we do so aiming to win,” added Gush.

“We weren’t that happy with how the race went especially the last few laps. The Nissan seemed to find some power it didn’t have before and the last corner antics hurt us as well.”

Prior to heading to Australia, Bentley will field its two factory cars in the Sepang 12 Hours, which is scheduled for December 11-13.

Next Story Infection leaves Percat in doubt for Phillip Island