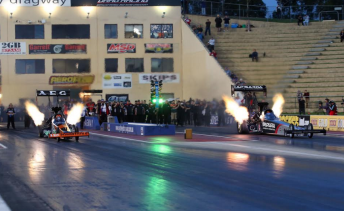 The 400 Thunder Australian Professional Drag Racing Series has announced a new agreement with an American sanctioning body, confirming a total split with ANDRA.

The IHRA is the second largest regulatory body for drag racing in the United States, boasting 98 tracks, while it also has sanctioning agreements in Canada, New Zealand, Aruba, and the Bahamas.

The announcement comes little over a week after the inaugural 400 Thunder event, the East Coast Nationals at Sydney Dragway and, according to the series, was triggered by a latest move from ANDRA.

“The East Coast Nationals was sanctioned by the Australian National Drag Racing Association (ANDRA), which last week took the extraordinary move of notifying Perth Motorplex it will not sanction future 400 Thunder events,” read the statement.

“ANDRA also notified its members that it is unlikely permits for Perth and Willowbank Raceway will be issued ‘in the foreseeable future for any event that forms part of a non-ANDRA series’, throwing into doubt other third party series run at the venues, including the Aeroflow Outlaw Funny Cars, Australian Pro Street Association Series, and Jamboree.”

A 400 Thunder spokesman added that the IHRA will recognise the existing rules, technical regulations and licenses to ensure a seamless transition for competitors.

“400 Thunder has attempted to work with ANDRA and had every intention of continuing with its sanctioning, but ANDRA’s actions last Tuesday left us with no alternative but to seek a new regulatory body to continue building what has been begun,” said the spokesman.

“Through our event staff 400 Thunder will take every step to ensure the switch to the IHRA is a smooth changeover.

“Australia’s governing body has made its decision not to sanction 400 Thunder on what we see as commercial grounds rather than safety and regulations.

“We’ve had enough of the politics over the past six months; the distractions are behind us.

“Now we are looking forward and focussing on the core goal of promoting top-level, professional drag racing in Australia – 400 Thunder style.”

Sportsman racers will also be included alongside the professional category in 400 Thunder’s IHRA move.