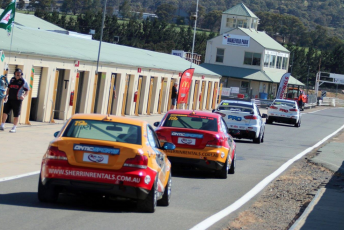 The Sherrin BMWs at the recent Wakefield Park AMC meeting

The agreement marks a surprise return to category management for the Sherrin family, whose Sherrin Motor Sport company ran the Mini Challenge and Carrera Cup in 2008 before its financial collapse.

Having struggled for grids this season, the production car category will lose its Australian Manufacturers Championship title next year as it is demoted to series status.

“The team here at CAMS look forward to working closely with Ontic Sports to continue the success of production car racing in Australia,” said CAMS General Manager of Motor Sport, Michael Smith in a statement.

“We would like to thank Rob Curkpatrick and his team for their services to production car racing over the years.” 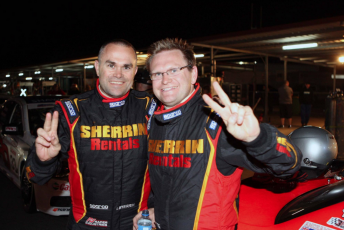 Brothers Grant and Iain Sherrin at Ipswich earlier this year

Sherrin says that the category must focus on minimising costs in order to attract competitors.

“I have raced in the category over the last five years and believe that it is one of the best categories in the country,” Sherrin said.

“When you look at the tracks we race on and the endurance format, you just cannot get that kind of track time anywhere else.

“We will be working hard to keep the costs down for the competitors while providing four to six hours of track time over a race weekend.”

The AMC’s season finale takes place at Sydney Motorsport Park this weekend, where a 15 car field is set to tackle a four-hour endurance race.

BMW 135i mounted Grant Sherrin currently leads the outright standings, four points ahead of co-driver Iain thanks to pole position bonuses at the last two meetings.

Next Story Shannons Nationals awards Driver of the Decade