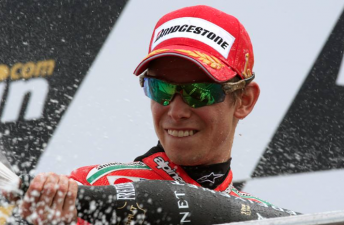 Casey Stoner has emerged as a possible candidate to land a test rider role at Ducati next year.

The former two-time MotoGP world champion is reportedly in the frame to make a return to the Italian manufacturer with which he won his first title in 2007.

Stoner has been operating as an occasional development rider for Honda since he retired from the premier class at the end of 2012.

The 30-year-old is under contract to Honda until the end of the year, but is already attracting attention from Ducati.

“Casey is a hero to Ducati, he won many GP races and the title in 2007,” Ducati sporting director Paolo Ciabatti told media in Valencia.

“Obviously he moved to Honda (in 2011) but he is still in the hearts of all the Ducati fans, and has a great relationship with many Ducati people.

“Let’s see what what the future brings – he is under contract to Honda until the end of this year, but if there is a chance to do something with him, we would love to do it.” 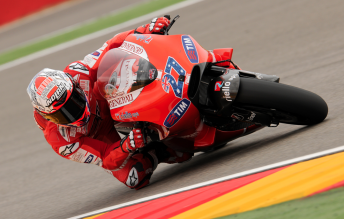 While details of the mooted arrangement are yet to be revealed, it has been suggested that the deal could include the a wildcard ride in the championship.

Stoner is understood to have put his hand up to replace the injured Dani Pedrosa in Honda’s MotoGP team earlier this year, only to be overlooked by the Japanese factory due to his lack of recent miles.

The rider made his motorcycle racing return at this year’s Suzuka 8 Hours with Honda, sustaining a broken shoulder and leg in a crash caused by a mechanical issue.

Meanwhile, Marc Marquez topped the times for the second day in succession at the post-season test at Valencia.

Despite a fall, the Honda rider improved upon the session best time he set on Tuesday posting a 1:31.060s, which was 0.103s quicker than Suzuki’s Maverick Vinales.

Pedrosa was third fastest while Suzuki confirmed their strong pace on the new Michelin tyres with Aleix Espargaro in fourth.

New world champion Jorge Lorenzo improved to secure fifth, while team-mate Valentino Rossi shaved a second off his best time from the opening day to move into seventh.

Next Story Bayliss to lead Aus Superbikes into new era