Tim Blanchard is closing on a new deal with LDM

The V8 Supercars silly season appears set for an early finish as negotiations over the final seats draw towards their conclusion.

Just four of the 26 entries are understood to now be without a driver following a recent flurry of signings.

The #3 Lucas Dumbrell Motorsport Holden, #21 Brad Jones Racing Holden, #99 Nissan and #111 Super Black Ford are all still in question, with each team looking for a funded driver. Tim Blanchard, Dale Wood and Chris Pither all sport considerable backing and are expected to fill three of the seats, although who goes where remains under some question.

LDM is closing on a new deal with Blanchard, which if concluded would make it the only team to head into the new season without some level of change to its driver roster.

Having never previously fielded the same driver for consecutive seasons, LDM already has Nick Percat on a two-year contract and is eager to retain its second driver.

Blanchard is currently negotiating a continuation of backing through his family’s Cooldrive company and, while assessing multiple options in and out of V8s, hopes to stay at LDM.

“We’re still working on it, but my preference is to stay at LDM,” Blanchard confirmed to Speedcafe.com.

“We’ve had a tough start to the year and I feel like we’ve made some big gains throughout the season.

“Baz (team manager Barry Hay), Nick and a lot of the key elements of the team are sticking around for next year, so I’d like to be a part of it, there’s just a few things to sort out first.” As previously reported, Pither and Wood are hot favourites for the Super Black and Nissan seats currently held by Andre Heimgartner and the Volvo-bound James Moffat respectively.

Super Black owner Tony Lentino told Speedcafe.com at Pukekohe that his operation is eager to bed down details of its Super Black Racing Foundation funding model before confirming its full plans.

Replacing Heimgartner with the Ice Break-backed Pither appears the favoured outcome, with the squad set to stay at Prodrive utilising a Racing Entitlements Contract recently purchased from Walkinshaw Racing.

Wood meanwhile enjoys significant support from GB Galvanizing and ADVAM and is a long-time friend of the Kelly brothers, previously driving with the squad in 2009.

With the deal yet to be locked away, Nissan co-owner Todd Kelly stresses that several options are still being canvassed.

“There’s a couple of really solid options which are both what we’re looking for in a driver and have also got some of their own sponsors to go along with it as well,” Kelly told Speedcafe.com.

“We’re happy that we’ll get a good result out of it, but we need to have it wrapped up as soon as we can so that we can focus on the rest of our program.” 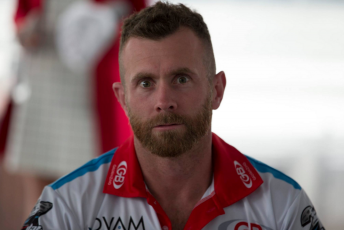 Plans for BJR’s #21 entry are less clear although could feature the retention of Wood or the team’s former Dunlop Series driver Pither if their deals fail to come off elsewhere.

Jason Bright, who has a 75:25 ownership split in the #21 REC with Brad Jones, says the car will continue to be run out of BJR.

“Brad is the one that will run it for the year and we’re talking a lot about it, but ultimately the driver will be his decision,” Bright told Speedcafe.com.

“There are negotiations still going on with several different people.”

Elsewhere, Cameron Waters’ deal with Prodrive is not officially done but is seen as an inevitability, while Tim Slade is locked in at BJR although yet to be formally announced by the team.

The current sponsor of Waters’ Dunlop Series entry, Enzed, is expected to follow the youngster into the main series following a dominant run in the second-tier.