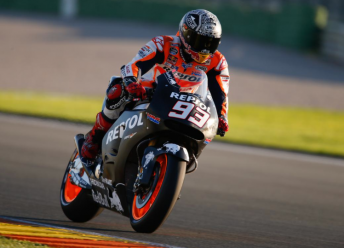 Marc Marquez recovered from a fall to top the times in the opening day of pre-season testing at Valencia.

The factory Honda rider was among a group of riders to crash at the Spanish circuit as the field adapted to the new-for-2016 Michelin tyres and control electronics package.

Despite falling early in the session, Marquez went on to post a 1:31.551s effort to surge to the top of the timesheets.

Ducati’s Andrea Iannone proved to be the double world champion’s nearest challenger with the Italian 0.088s adrift after logging 61 laps.

He also suffered a crash late in the session at Turn 3 where Marquez fell.

Valentino Rossi struggled to get to grips with the new tyres in 12th position claiming the fresh rubber and new electronics will make a huge impact next season.

“It‘s a big change and it will be interesting, especially the tyre will make a big difference for next year,” said Rossi.

“A lot changed, especially the setting, the weight distribution of the bike and everything. It looks like our competitors are a little ahead, because they‘ve made more kilometres with the Michelin, but it‘s just the first day. “We need to understand how much weight this tyre needs to turn at the maximum. We need some more time.

“I tried the new electronics and that, as I expected, was quite a big step because it’s like going a little bit into the past.

“However, it could be interesting and it’s only the first day, we have a lot to work on.”

Cal Crutchlow and Pol Espargaro both encountered falls on the way to ending the day in sixth and seventh respectively.

Meanwhile, Australia’s Jack Miller ended the opening day in 15th position aboard the Marc VDS Honda for the first time.

The Townsville rider was a second shy of the outright pace set by Marquez.

The final day of the test will begin later today.