Waters not backing down from ‘attacking style’ 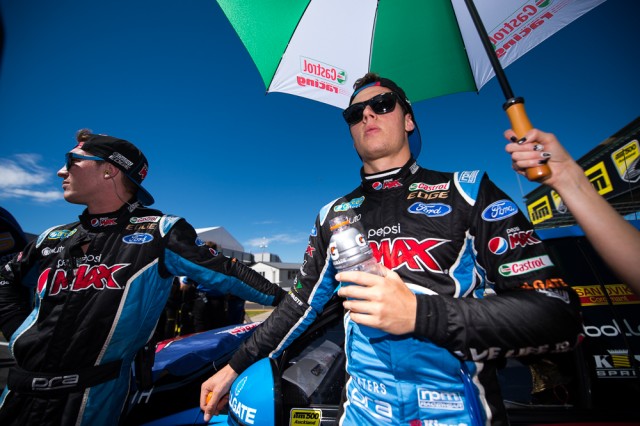 Cameron Waters on the grid prior to Race 30

Cameron Waters says he has no plans to change his attacking driving style after ruffling plenty of feathers during his maiden solo V8 Supercars start at Pukekohe.

The 21-year-old’s weekend included two penalties for contact with other cars, clouting Ash Walsh in Race 28 qualifying and spinning James Courtney during Race 30.

Eyebrows were also raised post-race on Sunday when it emerged that the #6 Ford had started the chain reaction that resulted in team-mate Mark Winterbottom’s lap two spin.

Combined with the strong form of David Reynolds, who Waters is poised to replace next season, the incidents sparked plenty of debate about the youngster on social media.

Waters has subsequently responded on his own Facebook page, making no apologies for ‘racing hard’.

“I had some great battles with the big names, learnt plenty while doing so and attracted some attention … but that’s cool … I’m all about racing hard and have no plans to change my attacking style,” he wrote.

Exemplary performances in this year’s Dunlop Series had seen Waters largely shed the ‘fast but erratic’ tag that had he had earned during his first season in Prodrive’s second-tier squad in 2014.

After a low-key run on the Gold Coast, Pukekohe proved Waters’ raw speed as he qualified within 0.2s of team-mate Mark Winterbottom for all three races.

Impressed by the youngster’s pace, Prodrive team principal Tim Edwards says he was more than happy to see Waters rub panels with his main series rivals on Sunday.

“One of the things you’ve got to do in this championship is flex your muscles a little bit,” Edwards told Speedcafe.com after Race 30.

“The new guys always get roughed up a bit by the old guard and he stood his ground. He wasn’t going to be walked over and it was good to see.

“The fact that he was up there racing the likes of Garth (Tander) and James was a credit to him. To be racing for 10th in this championship was still a very good achievement.

“I’m more than happy with the way he drove across the whole weekend.”

Both Edwards and Waters were critical of the stewards’ decision to issue a drive-through for the late-race hit on Courtney.

The Gold Coast race winner’s team-mate Tander had moved down the inside of Waters into the corner, squeezing the Ford driver for space.

“I was the meat in their sandwich at the hairpin… I had nowhere to go,” recalled Waters.

“Garth was inside of me and pretty much pushed me into Courtney who got turned around.

“The penalty is absolutely ridiculous – they should’ve looked at it after the race. But we don’t make those decisions.”

Waters finished 22nd after his drive-through penalty, adding to the 17th and 12th place results recorded in the Saturday sprints. Waters was in the thick of the action throughout the weekend

Next Story Chassis change for Lowndes after NZ crash

Previous Story Hard work ahead for HRT after rough Pukekohe