Piquet to return to TRS after false start 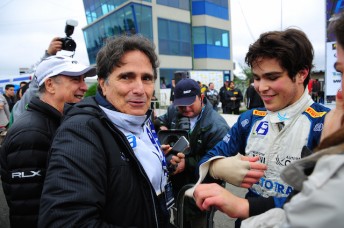 Pedro with his dad Nelson Piquet at Curitiba in Brazil

Pedro Piquet will have a second attempt at the Toyota Racing Series in New Zealand starting in January after his false start in the open-wheel category earlier last year.

The 17-year-old was forced to abandon his TRS campaign after just two rounds when it was discovered there was an anomaly over his competition licence.

Piquet, like many aspiring international drivers will now use the TRS which use a new Italian-made Tatuus chassis, as a vital warm-up for the demanding European Formula 3 championship.

The youngest son of triple Formula 1 World Champion Nelson Piquet has been a dominant force in Brazilian F3 over the last two years winning 11 of 16 races last year and 12 of 14 races in 2015.

Piquet also complemented his open-wheel commitments with Porsche GT3 Cup drivers which included a massive shunt in Brazil where he barrel-rolled nine times.

“I enjoyed my brief experience of TRS last time as a young rookie, but now I want to compete to win the championship before I go to Europe,” Piquet said.

Piquet will rejoin the M2 Competition squad who facilitated his aborted 2014 campaign which saw him claim a best finish of 11th from six races in the middle heat at Timaru.

“As a young 15-year-old he impressed me with his relaxed quiet approach,” said Thomlinson.

“His time spent in the Brazilian Formula Three series will have honed his skills, I expect that he will arrive well prepared and ready to challenge for the title.”