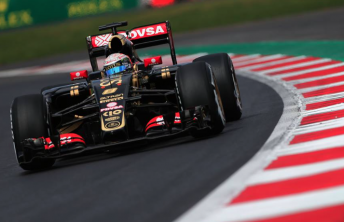 The Enstone operation has been engaged in talks with the French manufacturer, which confirmed its intention to take over the outfit in September.

Discussions between Lotus and Renault have continued since although a deal is yet to be concluded.

However, it has been reported that Renault staff have already started working at the team.

While the process has been lengthy, Carter says ‘confidence is very high’ surrounding the prospective takeover.

“Renault issued a letter of intent, so behind the scenes the Renault and Lotus senior management are working flat out to make sure that we get the deal done,” said Carter in an interview on Formula1.com

“Things are progressing, but these things take time. I am confident that the deal is going to happen, but as I said, it needs time to get it across.

“Well, we know that in business anything can happen and as long as there are no signatures on the documents the deal is not concluded – but confidence is very high.”

While the team is hopeful of a takeover, Carter revealed the outfit is working on two designs for its 2016 car if the deal falls through and they are forced to run with Mercedes engines.

“Well, we have two options for an engine next year: either we go with Mercedes or Renault,” added Carter.

“We are progressing along that route. We’ve got two designs for next year’s car and we are pushing forward with both options.”