Hard work ahead for HRT after rough Pukekohe 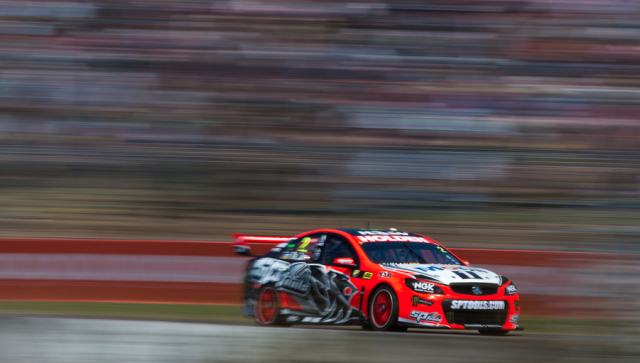 After success in the Pirtek Enduro Cup, the Holden Racing Team and its legion of supporters were given a stern reality check at Pukekohe.

The factory Holden team and its sister Walkinshaw Racing outfit suffered through one of its worst weekends of the season as the Clayton Commodores struggled to deal with the Auckland venue’s savage bumps.

In a stark contrast to the Gold Coast, where James Courtney drove to the Sunday race win and Garth Tander led his car to the Pirtek Enduro Cup crown, the four-car team failed to see the top five in any of the weekend’s three races.

The team’s competitiveness took a step backwards on the Sunday, where it has traditionally shone after slow starts. Tander was the top qualifier and finisher for the red team in Race 30, starting 14th and finishing 10th.

Although its general level of performance has lifted under Burgess’ two-year reign, the weekend served to underline the squad’s continued lack of track-to-track consistency.

“We just weren’t able to deal with the bumps in the first corner and the last corner,” Burgess explained to Speedcafe.com.

“We struggled all weekend and whatever we did to try and improve that hurt us in other places.

“To be honest we haven’t done a good enough job getting on top of it and we saw the results across the board.

“It was a pretty average weekend but we’ve got to try and understand what happened and try and learn from it.

“Clearly the next circuit is very different, but we can’t just forget about it and move on.

The results saw the HRT drop back behind Red Bull Racing Australia to third in the teams’ championship, with a deficit of 101 points marking a swing of 180 against the factory squad across the weekend.

Despite the team’s year having been heavily hampered by Courtney’s mid-season injury, Burgess insists there’s still plenty to gain out of the final two meetings at Phillip Island and Sydney Olympic Park.

“This year hasn’t been written off, we’re still identifying our problems and fixing them,” he said.

“Clearly this year hasn’t been very straight forward for us, but it doesn’t mean we’re going to get downbeat and bury our head in the sand.

“We’re going to keep working hard. It’s a very competitive championship and everyone is working hard, we’ve just got to get on with it.”

Next Story Waters not backing down from 'attacking style'