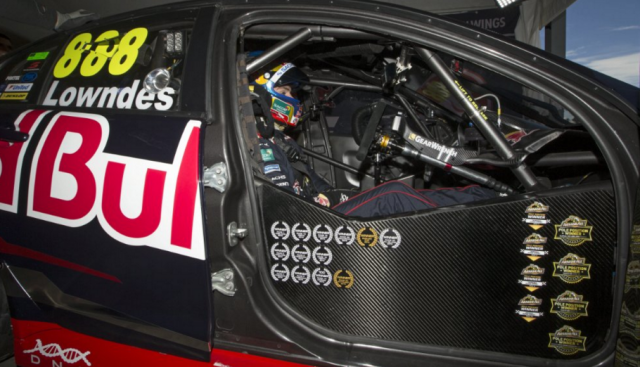 Despite the competitiveness of Craig Lowndes’ rebuilt car on Sunday, Red Bull will field a replacement chassis for the veteran at Phillip Island.

Lowndes’ mount throughout the season to date, dubbed 888-036, was heavily damaged when it crashed out of Saturday’s second sprint race at Pukekohe following a tyre blowout.

The car was hurriedly repaired overnight and, while going on to finish a strong second in Race 30, will now undergo an extensive rebuild at the team’s Banyo, Brisbane, factory.

Lowndes will instead complete the season in 888-037, which Jamie Whincup drove to last year’s championship title.

“037 is due to be our spare chassis going into next year, so it’s good to build it now and we will use it until the end of the year,” explained team manager Mark Dutton. “In the meantime 036 will be completely rebuilt to near new.”

The 037 chassis was debuted by Whincup and Paul Dumbrell with victory at Sandown in 2013 and was campaigned by the six-time champion until he upgraded for this year’s Melbourne enduro.

Lowndes’ chief mechanic Matt Cook says there is significant work to do for the team to get the car ready for dispatch to Phillip Island in less than a week’s time.

“We will be doing minimum fifteen to sixteen hour days up until Monday when the car has to go,” he said. “It’s basically a shell with a wiring loom in it, it’s a big effort but completely do-able.”

Next Story Bright looks for new direction at BJR in 2016

Previous Story Waters not backing down from 'attacking style'