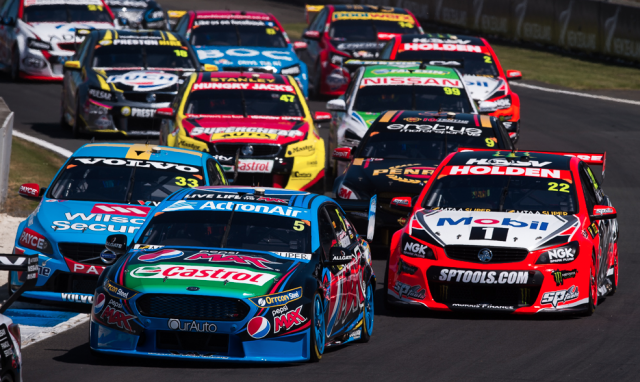 Being buried in the pack spelt trouble for Winterbottom at Pukekohe

Mark Winterbottom admits that the absence of regular team-mate Chaz Mostert has been a contributing factor to his poor results over the last two race meetings.

Winterbottom openly says he utilised set-ups devised by Mostert and engineer Adam De Borre earlier in the season as he worked to adjust elements of his driving style to the new FG X package.

Mostert had been the qualifying king prior to his season-ending crash at Bathurst, scoring 10 pole positions from the 23 sessions he contested.

While Mostert’s demise gave Winterbottom a healthy lead at the head of the championship, a lack of outright speed has contributed to a series of troubles across the last five races.

“We’re missing a little bit the fact that we copied his set-up quite a few times,” Winterbottom told Speedcafe.com of Mostert, who has been replaced by the less experienced Cameron Waters.

“He (Mostert) was doing vice-versa a bit too, but we’re certainly missing that a little bit.

“We’ve got the same engineers there, we just need to focus on what we need to achieve which is getting the car back to where it was.

“It was good at the end of the weekend at Pukekohe. We had the speed we just didn’t get to use it.”

Winterbottom finished outside the top six just five times during the year’s first 24 races, but has been seventh or lower in four of the last five.

“We need to qualify at the front, then that shit doesn’t happen,” he said, referring to an incident in which he was spun back to last on Sunday.

“It took three days to get the car where I wanted it in the last race.

“When you’re 25th on lap three, having the quickest car then is too late. We’ve got to get the car right.”

Winterbottom drove aggressively in Race 30 to recover to an eventual 11th place finish.

Although displeased by a particularly spirited side-to-side battle with Dale Wood through the Turn 5/6 chicane, Winterbottom is relaxed about being raced hard by those outside the title fight.

“The other guys have to race you, you don’t expect them to pull over for you,” he said.

“If they give you room when you dive in there, that’s all you ask. It’s just a respect thing.

“You don’t need people being heroes to make a statement. You race like you normally would.”

Overall the weekend was a positive one for Winterbottom’s championship prospects as he lost just 18 points from his previous buffer of 258.

With 600 points remaining, Winterbottom enjoys a comfortable 239 point lead over David Reynolds, who outshone his Prodrive stable-mate throughout the weekend.

Craig Lowndes is a further point back in third after his championship prospects were dealt a heavy blow with a tyre-failure induced crash in Saturday’s second sprint.

“I’m not going to be thinking about the championship, we’ve just got to make the car quick,” Winterbottom added. “We’ll get there.”