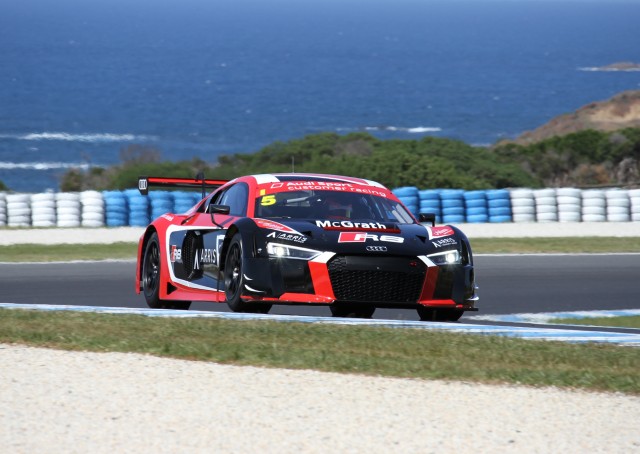 Experienced Australian GT drivers Barton Mawer and Nathan Antunes will team up to contest the Bathurst 12 Hour in a new specification Audi R8.

The Victorian squad will also prepare two Audi R8 entries for Jamec-Pem Racing, one of which will be piloted by V8 Supercars stars Craig Lowndes and Garth Tander.

Having contested the 2015 Australian GT Championship alongside Mawer, car owner Taylor moved quickly to enlist the services of Antunes to complete the Bathurst 12 Hour driver line up.

Antunes has been a star in the Australian GT Championship scoring three race wins in the series this season.

Set to be Taylor’s maiden Bathurst 12 Hour, the Sydney businessman is setting his sights on winning the amateur class.

“We will go into it with no pressure and I think we will be pretty speedy in the amateur class,” Taylor told Speedcafe.com.

“To win the Amateur class is our goal.

“I have a had a lot of success in Australian GT with Barton and will continue to run with him in that series next year.

“I approached Nathan (Antunes) about Bathurst and I think the three us will get along well and will complement each other.”

After landing in Australia late last month, the car completed its initial shakedown at Phillip Island two weeks ago.

Former single seater driver, Mawer, who logged laps at the test, believes the trio has all the ingredients to be successful at Mount Panorama.

The New South Welshman has competed in the last two Bathurst 12 Hour events, finishing the 2013 edition in 25th outright in a Class B Porsche.

“It is a big step but i’m pretty pumped up this is going to be the real deal,” Mawer told Speedcafe.com.

“The car is mega it really is very impressive. It feels like the big brother to the older car (Audi R8).

“We will try and go for the amateur title, we have got a good car and good team so it can’t come soon enough.”

The car will be in action at Phillip Island today as Melbourne Performance Centre evaluates Pirelli and Michelin tyres ahead of February’s endurance classic.

Next Story Roger Lago set for racing return at Highlands 101