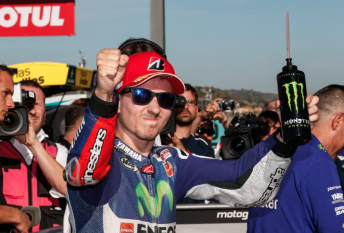 Jorge Lorenzo claimed his third MotoGP world championship by hanging on to record victory in a tense final round at Valencia.

Lorenzo held his nerve under immense pressure to take the win and the crown as title rival Valentino Rossi narrowly missed out on the championship despite an admirable ride from the back of the grid to fourth.

The factory Yamaha rider was never allowed to relax with the Honda duo of Marc Marquez and Dani Pedrosa hunting the Spaniard, before settling for second and third at the flag.

Lorenzo’s victory saw him overturn Rossi’s seven point championship lead to become only the third rider to turn around a points deficit to win the championship in a title decider.

“To be honest I didn’t see any (lap) boards to see how many laps were left.

“I tried to focus myself, keep my concentration and pray to finish the race.

“I’m very proud, this is a world title for Spain.”

Lorenzo put himself in the box seat to lift the championship after a perfect start from pole position as the Hondas of Marquez and Pedrosa slotted in behind.

All eyes were on the progress of Rossi from the back of the grid as the Italian scythed his way through the field in the opening laps.

By lap 12 the 36-year-old had surged into fourth spot after a series of pressure overtakes.

While Rossi was fighting through the field, the top three had broken away at the front which ultimately ended the Yamaha rider’s world title hopes.

A late charge from Marquez and Pedrosa did put the title back in the balance but Lorenzo did just enough to fend off the pair to take the win and the championship.

Tech 3 Yamaha’s Pol Espargaro emerged as the best of the rest in fifth ahead of team-mate Bradley Smith and Ducati’s Andrea Dovizioso.

Suzuki’s Aleix Espargaro was eighth while Cal Crutchlow finished ninth after a mechanical issue saw him start from the back of the grid.