Johnson leaves it late to win in Texas 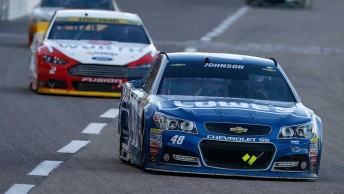 Jimmie Johnson has swept by Brad Keselowski with four laps to run to win the AAA 500 at Texas Motor Speedway.

As good as it was for Johnson, it was heartbreak for Keselowski who went from a sure place in the final four drivers contesting for the Sprint Cup at Homestead-Miami Speedway, to having to win next week at Phoenix.

Starting off pole, Keselowski led a total of 312 laps and looked set for victory before a caution period with 18 laps to run. On the re-start he first of all held off a determined Martin Truex Jr. before Johnson pushed over the next 10 laps.

Johnson’s pressure finally coming through as he got around the Penske Ford and drove away. It broke a 20 race winless streak for Johnson.

“Man you get so caught up in the moment racing with guys, and I want to race guys clean,” said Johnson.

“I just kept working on him and working on him. I could see that his car was not ideal and he got real loose and I got the run through and took the lead.

It was tough result Keselowski and also Penske team-mate Joey Logano, who on just the second lap had a left rear tyre let go. The rear of the car sustained serious damage and he had to go to the garage area for extensive repairs.

Tyres were a major talking point with a number of drivers having repeat issues. Both Kyle Bush and Kevin Harvick, had multiple tyres failures. Both said to be after running over debris. Harvick’s tough day also included a gear shifter, which kept jumping out. He drove the second half of the race with his hand on the shifter through at least the corners.

Next week’s race at Phoenix will set the final four drivers for the title decider. With Jimmie Johnson already eliminated, Jeff Gordon is the only driver assured of a place in the final four after winning last weekend at Martinsville.