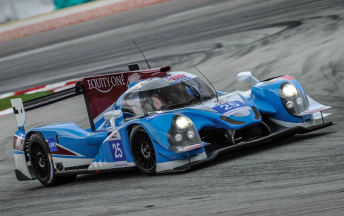 Winslow had put the Algarve Pro Racing Ligier on pole but the squad were unable to match the pace of the Race Performance Oreca piloted by ex-F1 driver Shinji Nakano and Nicolas Leutwiler.

“I was a bit careful, because it’s my first ever LMP2 race. I wanted to make sure I didn’t do anything silly or make and mistakes and deliver the car back to the team in one piece,” said Koutsoumidis.

“The car was a delight. It was fantastic. All the other drivers were fantastic as well.”

Former two-time Australian Formula 3 champion Winslow, who has coached Koutsoumidis in the lead up to the event, said a communication problem hampered his final stint.

“I really struggled with the heat for the last half an hour. The radio pulled out of my ear in the driver change, so I had no radio and no idea how many laps I had to go,” said Winslow.

“I just cruised it around and tried to look after the tyres, and take it to the end of the race.

“I’m hugely proud of Dean (Koutsoumidis) for his effort during the second stint in what was his LMP2 debut.” The Eurasia Motorsport trio of Richard Bradley, William Lok-Tack and Sung Kim claimed the final place on the podium in third.

The Asian Le Mans Series continues with a visit to Thailand’s Buriram circuit from January 8-10.

Australian Jordan Love asserted his dominance on the AsiaCup Series by completing a clean sweep at the second round at Malaysia’s Sepang circuit.

The Western Australian proved to be in a league of his own as he recorded victory in each of the five races in the popular junior single seater category.

It was the Australian Formula 4 driver’s second clean sweep of the AsiaCup Series season following his triumphs at the opening round in August.

“This has been another awesome weekend for me,” said Love.

“To come away with another clean sweep is definitely something I am truly proud of, especially given that there were a number of good battles on track with Adam (Khalid).

“Race 5 was similar to Race 3 in that the weather was a crucial factor.

“When the rain started to get heavier, I knew I needed to keep my cool and changed my strategy to ensure that I did not need to take any unnecessary risks.”

The AsiaCup Series returns for the final round at Sepang from November 27-29. 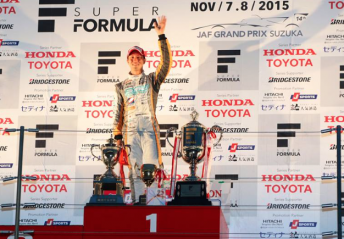 Hiroaki Ishiura secured his maiden Super Formula title in a rain soaked final round at Suzuka.

The Tokyo-based driver scored a second place finish in Race 1 followed by a fourth in the final race of the season, which was enough to take the title.

Audi LMP1 star Andre Lotterer proved to be the class of the field in the opening 20 lap contest as he took the chequered flag by 5.895s from Ishiura, with former Sauber F1 driver Kamui Kobayashi in third.

With title rival Kazuki Nakajima in fourth, Ishiura opened up a 7.5 points lead in the championship.

The buffer ensured Ishiura only needed to finish in the points to claim the title.

In the end, Naoki Yamamoto won the final race from Nakajima. Ishiura eased to a fourth place finish behind Joao Paulo Lima de Oliveira to secure the title.

Next Story Piquet to return to TRS after false start