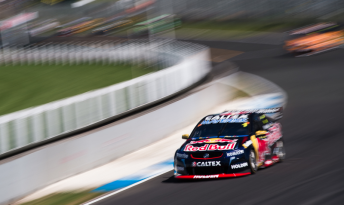 Jamie Whincup secured the Jason Richards Trophy with a dominant victory in the final race of the weekend at the ITM 500 Auckland.

The six-time champion was untouchable throughout the 69 lap contest, eventually taking the flag 4s ahead of team-mate Craig Lowndes.

A one-two finish proved the perfect result for Red Bull Racing Australia after being forced into a major rebuild on Lowndes’ car overnight.

Starting ninth, Winterbottom was turned around at the hairpin on the second lap, rejoining in last place.

The incident, which will be reviewed post-race, saw Jason Bright’s Holden tip the Ford into a spin in the middle of the pack.

The results see Reynolds sit 239 points behind Winterbottom with two events and 600 points remaining, while Lowndes is just one point further adrift in third.

Differing fuel loads was the only strategic card in the race following V8 Supercars’ move to mandate soft tyres for the first stint only.

The softs ended up running just eight laps as a Safety Car, triggered by Nick Percat being spun by Rick Kelly, saw the entire field head to pitlane.

McLaughlin and Reynolds ran second and third respectively in the early laps before trading places in the first round of stops.

Lowndes dropped from eighth to ninth in the pitlane after being forced to momentarily stack behind team-mate Whincup.

The second Red Bull entry moved up to sixth by the time the second stops kicked off on lap 30 and, needing less fuel than his rivals during his second trip to pitlane, eventually emerged second.

Pye’s fuel strategy saw him jump from fourth to third in the second stops, while Reynolds, Michael Caruso and Scott McLaughlin filled the top six and retained those positions to the chequered flag.

Caruso had survived two touches from team-mate James Moffat on the opening lap, the second of which sent the former straight through the Turn 5/6 chicane.

Fabian Coulthard and Lee Holdsworth had solid runs to seventh and eighth respectively, while Shane van Gisbergen charged to ninth after falling as low as 17th when stacking behind Pye under Safety Car.

Garth Tander took advantage of a late tangle between team-mate James Courtney and Cameron Waters to score 10th on a tough weekend for the Holden Racing Team.