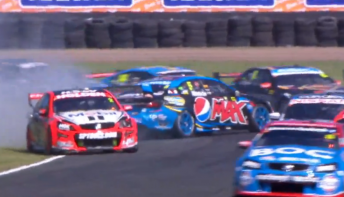 A four-car fracas that resulted in Mark Winterbottom being turned around in Race 30 has been declared a racing incident.

Championship leader Winterbottom was spun back to last on the second lap after a nose-to-tail concertina at the tight hairpin.

The investigation revealed that, unseen by external television cameras, Waters triggered the incident by making contact with the rear of Courtney’s HRT entry.

Courtney then hit Jason Bright’s Team BOC Holden, which tagged Winterbottom into his spin as the Ford turned the corner.

Bargwanna deemed that Waters had not been careless in his actions, resulting in the ‘racing incident’ outcome.

Winterbottom was unaware of Waters’ part in the drama when approached by Speedcafe.com post-race.

“It doesn’t matter if anyone gets a penalty, it doesn’t help me,” he said after fighting back through the pack to 11th.

“A tap like that just spins you around so quick. I was just thinking ‘please no one else hit me’.

“I just counted the cars going past and then did a flick-spin and got on with it.”

Despite not being at fault, Bright told Speedcafe.com that he felt bad for Winterbottom as the accident unfolded.

“I got hit really hard in the back, which was from Courtney, but it sounds like he got hit in the back too,” said Bright.

“Frosty was just the unlucky one that was at the front of the line with steering lock on turning into the corner.

“I felt really bad for him. I certainly wasn’t going to run into him by myself.”

Waters was given a drive-through for a separate incident at the hairpin late in the race that saw the Pepsi Max Ford spin Courtney while battling for 10th.

The youngster had been squeezed between the two HRT cars when the contact occurred as, while Courtney cut down to a late apex, Tander was simultaneously ranging down the inside of the Ford.