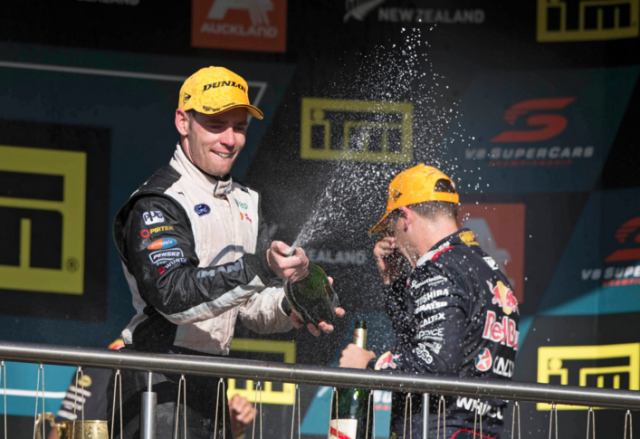 Scott Pye celebrates on the podium

Scott Pye says it was a relief to bring home a maiden podium finish for himself and DJR Team Penske in Race 30 at Pukekohe after a number of near misses at recent events.

The #17 Ford has shown strong speed since Sandown in September only for a series of issues, most dramatically including a steering failure at Bathurst, costing major results.

Pye began the day at Pukekohe by topping final practice – the first time the DJRTP entity had topped any session – before going on to score third in qualifying and the 200km race.

The results completed a solid weekend that had also netted a fifth and an eighth from the two Saturday sprints.

“It is a relief,” said Pye in the post-race press conference.

“Bathurst was fantastic for us. The car speed was there. It has been there the last few rounds but we have just struggled to convert. This weekend I felt we ticked all the boxes.”

Today’s result was made all the sweeter by the attendance of owner Roger Penske, who made his first visit to a V8 Supercars event since the squad’s horror showing at Barbagallo in April.

Pye only had a brief interaction with Penske post-race before the American billionaire headed to his next appointment in Japan.

“He doesn’t stop and I barely got to chat with him all weekend. That was probably the longest I spoke to him when he said ‘well done’,” said Pye.

“It is fantastic for him. It wasn’t a win and he is used to winning but for now I don’t mind being beaten by these two (Jamie Whincup and Craig Lowndes).

“They are the best in the game and I am proud to be sitting alongside them for my first time and I hope it is the first of many to come.

“Hopefully we can move up a little bit more for the rest of the year, get a couple more podiums and maybe a win. I am really proud of all the guys.”

Pye paid particular tribute to the squad’s crew of engineers and mechanics for their efforts to turn around what had once been a troubled season.

“When I got in at Tasmania the car was not in a great place,” he said, having been lapped in the Sunday race at the Tasmanian venue.

“Even as a bunch of guys as a unit we are working much better together. I feel like my engineers and mechanics are communicating really well and those stops in that race where excellent, the guys need lot of credit for that.

“To get the champagne I hope the boys really appreciate that because when we can reflect on where we have come from this year it is a big turnaround.

“Marcos handed over to me which was a great opportunity and one I grabbed with both hands. I am excited about the future, it’s eight months and I’m looking forward to seeing what we can do next year.”

Pye meanwhile declined to discuss the future of Ambrose who, as Speedcafe.com revealed earlier in the day, will not return for next year’s endurance races.

“To be honest I don’t want to comment too much about it because I only… sitting on the loo I saw on Speedcafe that Roger had said something,” he smiled.

“I haven’t actually heard from Marcos today and it’s not for me to say obviously. He did a fantastic job with us this year and I’m really grateful he gave me this opportunity and fortunately I’ve been able to do a good job.”

Next Story Passion shines through for sleepless Red Bull