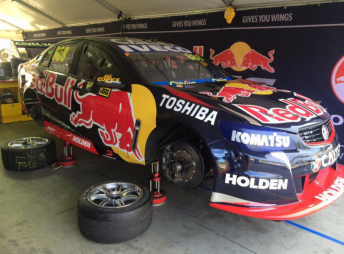 Craig Lowndes will return to the track for final practice this morning following an overnight rebuild of his Red Bull Racing Australia Holden.

The three-time champion’s car suffered extensive front and rear damage when it hit the pit straight wall after a tyre blowout in Race 29 on Saturday.

Unable to fix the damage at the circuit, the car was taken to a local panel shop in Pukekohe yesterday evening.

It returned to the circuit at midnight before the team worked until 0600 local time completing the rebuild.

Practice 4 at 1050 will give Lowndes a chance to test out the car before qualifying and the 200km Race 30.

“The front of the car had more damage than we expected,” Lowndes told Speedcafe.com.

“It obviously went in tail first but then it slapped the front in, so that was the biggest headache.

“The boys were able to use a local workshop to cut and shut a few of the chassis rails.

“The car got back at midnight and the guys did shift work to put it all back together and are doing the flat patch now.

“The stewards have passed the car. Structurally it’s sound but it’s not so pretty underneath.

“Luckily we’ve got a warm-up this morning so we’ll give it a shakedown and see how it goes.

“For the guys to completely pull the car apart and put it back together, we’ve got to make sure all the nuts and bolts are done up properly.”

Lowndes added that his team still does not understand why the tyre exploded.

“I didn’t run off the track or use any more kerb than what Dave (Reynolds) was, so we still don’t understand what happened,” he said.

“There was no vibration before the tyre just exploded.”