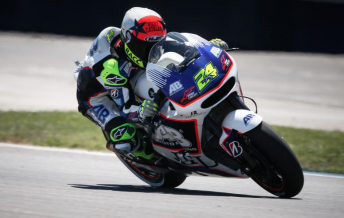 MotoGP has revealed a 22 bike field for the 2016 season with Forward Racing and AB Racing outfits omitted from the provisional entry list.

The announcement means the pinnacle of motorcycle racing is set for a reduction in grid size having operated with a 25 bike entry this year.

The team missed the Indianapolis round before returning to complete the remaining rounds of the season with Loris Baz and Toni Elias.

Meanwhile, AB Racing has completed the second half of the season without regular rider Karel Abraham due to injury.

Australian riders Damian Cudlin and Broc Parkes have both filled in for Abraham at events this year.

The entry list also confirms that Ioda ART will return to the grid next year with Alex de Angelis, who continues to recover from serious injuries sustained in a crash at the Japanese Grand Prix.

De Angelis is aiming to be fit enough to ride again in February.