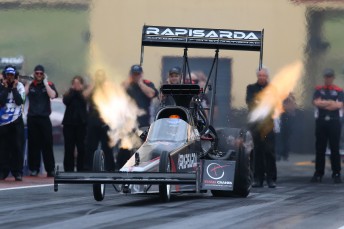 McClenathan beat the returning Darren Morgan on a holeshot in classic USA vs Australia final, running the 400m in 4.68 seconds at 505 km/h.

His winning time a hundredth of a second slower than his opponent.

“We had some things go our way and a bit of luck come our way,” said McClenathan, the two-time U.S. Nationals winner and reigning Winternationals champion.

“I love being part of the four-car Rapisarda Autosport International outfit.

“Team owner Santo runs a professional operation that rivals American teams and I’ve got incredible backing when I come out to race for them.

“Winning the last two events I’ve raced here should give him reason to keep bringing me out.

“The 400 Thunder racing has been fiercely competitive all weekend.

“I faced my teammate and fellow American Dom Lagana earlier and he had me scared, and Darren (Morgan) was a great challenge.”

In semi-finals Top Doorslammer competitor Mark Belleri was involved in a big crash in his Holden Monaro, losing control mid-way down the track and hitting the wall at more than 160km/h.

Belleri emerged unscathed in the incident, while eight-time and reigning champion John Zappia went on to take class honours, defeating Ben Bray in the finals.