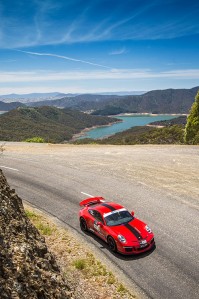 Matt Close on his way to victory

Matt Close has taken the prized Showroom class title at Targa High Country after a brilliant drive in his 2015 Porsche GT3.

Close and co-driver Cameron Reeves stormed into the lead on the second of the three days, extending that advantage over the 2014 McLaren 650S of Tony Quinn to eventually win the new glamour class by two minutes and 32 seconds.

The 4WD Showroom competition was taken out by Stewart Liddle, while another Mitsubishi Lancer Evo X, in the hands of Toby Gill, won the Modern category.

In one of the drives of the event, Alan Roe took the Early Modern honours in his Lancer Evo 6.5, with Steve Glenney calling the notes.

Pete Nunn was the class of the field and convincingly won the Classic Outright competition in his 1985 Porsche 944 Turbo.

The final day of the Mt Buller based event was the toughest of the three. Two massive 40 kilometre stages on the way to Eildon and back, and a competitive distance of 125 kilometres, tested drivers to their limits.

After finishing second on four previous Targa rallies, this was Matt Close’s first win, coming in the debut event for his Porsche GT3.

“It’s awesome,” Close said. “We came to tick a few boxes and we did that.

“We wanted to be competitive with Tony (Quinn), so we’re pretty happy. We kept benchmarking, but we just didn’t want to back off.

“Coming up Mt Buller the final time was probably the best drive I’ve ever had.”

Quinn was the Showroom winner at Targa Tasmania back in May, but his magnificent McLaren 650S was unable to keep up with Close’s Porsche over the twisting stages of the final day. Nevertheless, he finished clear of Craig Dean’s Ford Mustang in third, with motor racing legend, Jim Richards, fourth in a brand new Porsche GT4.

The runner-up in 2014, 4WD Showroom winner Stewart Liddle set up his win on the first day, establishing a 59 second lead after the opening stages. From there, he needed to keep up his speed and ensure that he brought the car home safely in first place.

“It’s my first ever win and the first win for the car, so we are absolutely rapt like you would never believe,” Liddle beamed.

“We had a nice clean run up the mountain and the car has just been magnificent over the three days.”

Angus Kennard, formerly a Subaru driver, kept the pressure on all weekend in his Nissan GTR, but Liddle’s pace proved too much. A good battle for the final place on the podium was eventually claimed by Trevor Norton’s Subaru.

Only three seconds separated Toby Gill and Nathan Reeves after the first day of competition in Modern, and that was the final margin after a race that see-sawed all day.

Reeves grabbed the lead with one stage to go, but Gill wasn’t to be deterred, rocketing up Mt Buller to snatch the victory.

Max Williams pushed hard throughout in his Lancer Evo X, shuffling Adam Spence and his Nissan GTR out of the top three to eventually take third place.

“This is brilliant, I am so stoked,” Gill said.

“We just didn’t think it was going to happen, particularly given there was only seven seconds in it coming into the last stage.”

Pete Nunn’s Classic Outright win was his second in a row at Targa High Country. The 1985 Porsche 944 Turbo driver was never seriously threatened after the first day, and beat home Adam Kaplan’s Mazda RX7 by just over a minute. Matthew Cardinaels was third in a 1972 Datsun 240Z.

“We won last year, but it feels better to win this year, particularly given today we had hard, long stages that were a real challenge for both the crew and the car,” Nunn said.

The handicap classes are won by the Datsun 240Z of Roger Lomman (Early Classic) and Cardinaels’ Datsun (Late Classic).