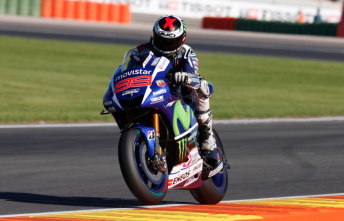 The Yamaha duo are set to go head-to-head for the 2015 championship with Lorenzo bidding to overturn a seven point deficit to Rossi to claim a third world title.

Lorenzo boosted his hopes of winning the 2015 title by securing pole position, while his rival will be forced to start from the back of the grid, following a penalty for the Sepang clash with Marc Marquez.

The odds are stacked against Rossi with the Italian needing to finish second to win a 10th world title, if Lorenzo converts his pole position into a victory.

Despite the grid position advantage, Lorenzo refuses to rule his team-mate out of the championship fight.

“Yes, for sure (Rossi can win title) – he has seven points of an advantage and the race has to be run, If for some reason I cannot finish the race, Valentino is the champion,” said Lorenzo.

“In a motorcycle race, anything can happen – especially in MotoGP.

“For me, it’s not so simple. I have to finish first or second to be more or less sure I can win the championship.

“For Valentino it will be difficult to arrive second, but not impossible.”

Facing a tall order to secure the world championship, Rossi admits Lorenzo’s pole position is another blow to his hopes but refuses to give up the fight.

The 36-year-old also confirmed he avoided injury from a crash sustained in qualifying.

“It will be very hard, the bad news for the race is that Jorge rode to pole position, because we hoped he wouldn’t start first,” said Rossi.

“But fortunately we don’t have to think about that, it’s not our problem.

“I just have to recover as much as possible.

“I’m OK (following the crash) this is the most important thing.”