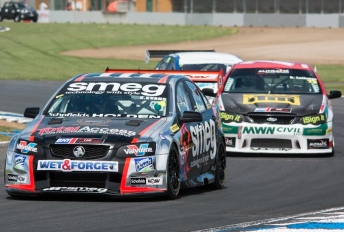 Simon Evans took victory in the second round of the NZ V8 Touring Cars Championship at Pukekohe after he and Craig Baird shared the spoils on Sunday.

After winning Saturday’s opener, Evans once again proved to be the class of the field as he came from behind to take victory in Race 2.

The Smeg Holden driver spent much of the race behind Mitchell Cunningham after losing the drag race at the start, which saw him fall to third behind Angus Fogg.

However, Evans quickly regrouped shadowing Cunningham for several laps before diving underneath the Ford Falcon at Turn 8.

Once in front, Evans made no mistakes as he took the chequered flag from Cunningham, with Tim Edgell coming home in third.

Aussie Bryce Fullwood brought his Commodore to the finish in fourth ahead of experienced campaigners Baird and Jason Bargwanna.

Fogg secured seventh after recovering from an early spin at Turn 5 that saw him drop from third to 13th spot.

The Team Kiwi Racing driver made the most of a strong start as he edged away from his rivals lap by lap to take the chequered flag by 3.7s from teenager Fullwood and Cunningham.

Darwin-born V8 rookie Fullwood produced a faultless drive throughout his Pukekohe debut to claim a deserved podium following a slick pass on Nick Ross, who held second in the early stages.

Cunningham was forced to defend from Evans in the closing stages, with the latter settling for fourth after scything his way through from 12th on the grid.

Evans leads the championship standings by 19 points from Cunningham heading into the third round at Hampton Downs from November 28-29.

Booth made the most of a stunning opening lap in the reverse grid Race 2 that saw him make up six positions.

His progress didn’t stop there with Booth going on to grab the lead before completing a relatively comfortable victory from Mark Gibson and Brett Rudd.

A mistake from Paul Manuell gifted Gibson the victory in the final race after the former locked up at Turn 3 while in the lead.

In the end, Manuell held on to record second from Booth.

The Auckland driver came through a partial reverse grid to win Race 2, before recording a dominant victory from pole in Race 3.

“It’s been a perfect weekend and a parfect start to the championship, but the speed of the guys behind me has come up a lot over these three races so I know it’s not going to as easy at round two,” he said.

Whitley produced a fighting drive from behind to win the day’s opener after finding a way by early leader Aaron Harris.

The race was not without drama with the Safety Car called on the opening lap for a multiple car accident.

Meanwhile, Christina Orr was lucky to escape from a heavy hit with the wall at the final corner in the closing stages.

The third race of the weekend was decided by a drag race to the line that saw Dodge pip Kieran Rollinson by a tenth.