Whincup led every lap on the way to victory

Victory from pole position marked the perfect result for Jamie Whincup and engineer David Cauchi as the pair restarted their partnership at Pukekohe.

Whincup led each of the 21 laps, eventually taking the flag 4.4s clear of second placed Shane van Gisbergen to record his fourth win of the season.

The result comes in the first event with Cauchi back in the race engineer role on Whincup’s car following a mid-season shake-up.

Third place finisher David Reynolds held off a determined Van Gisbergen through the opening corners of the race, but later gifted the position to his rival following an early Safety Car restart.

The full course yellows were called on lap five due to debris on the back straight.

Whincup took a high line as he fought rear locking into the hairpin on the restart lap, before cutting down to a late apex.

That triggered an awkward moment for Reynolds, who nudged the back of the Holden and, with momentum lost, was overtaken by Van Gibsergen on exit.

The Kiwi chased future team-mate Whincup for the duration, but could do nothing to stop the six-time champion driving into the distance.

Reynolds held on for third ahead of Craig Lowndes and Scott Pye, who delivered the bulk of the entertainment in the closing stages. 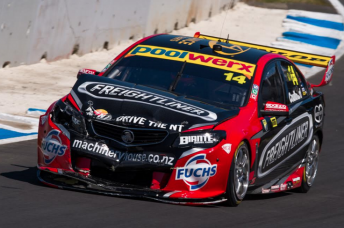 Under heavy pressure, Pye ran through the Turn 5/6 chicane on the penultimate lap and was subsequently instructed by race control to yield the place.

While he did not do so before the flag, the result was amended immediately post-race to drop the DJR Team Penske Ford to fifth.

There was drama on the opening lap, where a concertina at Turn 6 saw Tim Slade nudge Will Davison into a spin.

The Erebus Mercedes was subsequently hit head-on at slow-speed by a luckless Fabian Coulthard.

Damage put Davison out on the spot, while Coulthard soldiered on after a pitstop for repairs to finish 24th.

In a horror race for Brad Jones Racing, Dale Wood was forced to pit to fix rear-end damage, while Jason Bright’s entry stopped on the circuit in the closing stages.