Jamie Whincup and David Reynolds took an Armor All Pole Award apiece ahead of today’s sprint races at the ITM 500 Auckland.

Whincup edged Reynolds to pole in the first session on the hard tyres before the Ford driver turned the tables when the softs came out for the second hit-out.

Whincup scored pole for Race 28 despite an off track excursion at Turn 4 in the dying stages.

The Red Bull driver recorded a 1:03.32s best on his opening set before falling 0.07s short of that benchmark on the first lap of his second run.

Spearing off at Turn 4 on the next lap, Whincup was able to reverse out of the grass without triggering a red flag, ensuring his fastest time stood.

Scott Pye recovered from an off of his own at Turn 4 to jump to third after the chequered flag, demoting Shane van Gisbergen to fourth.

Michael Caruso and James Moffat put their Nissans in the top 10 with eighth and 10th, sandwiching the lead Walkinshaw Holden of James Courtney.

Cameron Waters and Ash Walsh will start 14th and 24th respectively after contact between the pair at the Turn 5-6 chicane in the closing stages.

The right-front of the Mercedes clipped the left-rear of the Ford as Waters dived to the inside. Walsh’s car was out on the spot, while Waters retreated to pitlane. 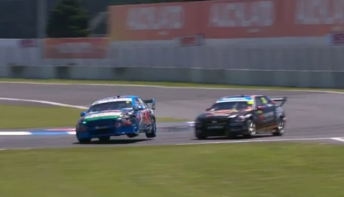 Waters and Walsh clash at Turn 5 in Race 28 qualifying

The second session saw the soft tyres used at Pukekohe for the first time and, with just a single set per car, it took until two minutes remained for the first real flying laps to start.

Tim Slade was first on track with the soft rubber and immediately went 0.6s quicker than Whincup’s Race 28 pole time.

The Supercheap Holden eventually fell to seventh however as Whincup, Lowndes and then Reynolds all shot to P1.

Reynolds’ 1:02.47s pipped Lowndes by 0.02s, while McLaughlin was one of few to improve on his second lap, jumping from sixth to third.

Whincup will share the second row with McLaughlin, with Courtney and Winterbottom behind.

Waters snagged 10th after an impressive effort from the Prodrive crew to fix rear suspension damage sustained in the earlier session.

Walsh was unable to take the circuit and will start last.

“It was just a bit of a lucky dip that session as we have never run the soft tyre here before,” explained Reynolds.

“It is a lot of hard work out there, it is not easy especially not knowing the grip level on the first lap, but luckily my car was handling well.”