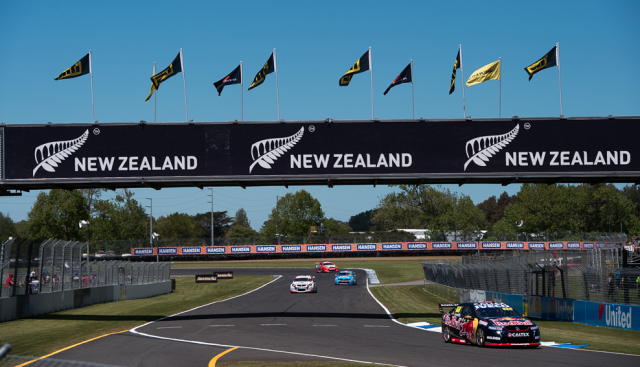 The V8 Supercars on track at Pukekohe

As per all Super Sprint events, a single set of soft rubber will be seen in today’s second qualifying session and corresponding 60km sprint, while a second set is allocated for use in Sunday’s race.

At other venues, however, teams can use previous soft tyre data as well as knowledge gained on pre-marked softs in practice to assess car set-ups and driving techniques ahead of qualifying.

The fact that Pukekohe has not previously seen the soft rubber and that its status as an international event prohibits pre-marked practice tyres both work to heighten the challenge of the sprint format.

“We’ve got to put a set-up in that we believe will work and hopefully not miss the mark too much,” explained Craig Lowndes.

“From what we’ve seen already the cars (lap times) are pretty tight from top to bottom, so any slight mistake throughout the lap will be pretty costly.”

Title rival Mark Winterbottom says guessing the grip level is an awkward task for the drivers who must get the most out of the tyres in one qualifying run.

“When you put the soft on it can be a completely different car,” said Winterbottom.

“It’s going to be interesting and good viewing. It’s bad in the car but it’s good for the people at home.”

Scott McLaughlin says the qualifying challenge is not unlike that experienced in practice on Friday.

The 60 minute sessions saw teams tuning their cars with a gradually deteriorating first set of hard tyres before completing a single flying lap on brand new rubber of the same compound at the end.

That process saw the Kiwi’s Volvo jump from mid 1:04s to a best of 1:03.1s to set the pace in second practice.

“(Yesterday) was probably a good warm-up for us all in some ways,” said McLaughlin.

“The (change in) grip limit is probably going to be the same, if not better, than from a hard to a soft.

“It’s about whoever hangs it out the most will get rewarded, but you’ve got to have a good car as well.

“We’ve been lucky at GRM that we don’t have to change our car too much from tyre to tyre.

“That’s hurt us in some places but I think in qualifying it’s actually worked for us.”

The afternoon’s 60km race will provide experience of the soft tyres over an extended run before Sunday’s 200km finale, where teams are expected to attempt double-stinting the softs, as has been seen at other venues throughout the year.