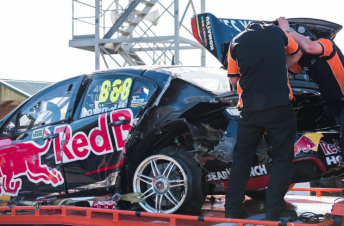 Craig Lowndes’ Holden is returned to the pits

Red Bull is working to return Craig Lowndes’ Holden to the track on Sunday as it clings to the veteran’s now slim hopes of a fourth title.

Lowndes’ Commodore made heavy side-on contact with the concrete wall at the end of the front straight after suffering a sudden tyre explosion while leading Race 29.

In the immediate aftermath of the crash, the team remained unsure of the cause, saying only that there had been no slow leak in the tyre.

Initially confident that the damage was only bolt-on items, further investigation has revealed extensive repairs are required.

The chassis has been taken off-site to be fixed on a jig, with the team racing against time to have it ready for tomorrow’s qualifying and 200km race.

The failure to finish sees Lowndes drop to third in the standings, 306 points behind leader Mark Winterbottom and 46 adrift of race winner Reynolds.

“We are never giving up,” said Lowndes’ engineer Grant McPherson shortly after the completion of the race.

The sudden failure was a major shock to Lowndes’ closest pursuers David Reynolds and Jamie Whincup, who went on to finish the race first and second respectively. The car being taken from the circuit this evening

“It was like a missile hit his car and exploded, it was huge,” said Reynolds.

“I was kind of a little bit scared when it happened, but as soon as I knew he was alright we were good to go.

“After that I was driving a metre off the kerbs every lap making sure it didn’t happen to me.”

“It was nuts,” added Whincup.

“It was exactly the same as Super Mario kart when the leader gets the ‘blue’ or the banana peel.

“It was great to see Lowndesy get out of the car but unfortunately for Red Bull Racing it’s not good news for the championship.”

Whincup meanwhile defended the weekend’s format that saw drivers experience the soft tyres for only a brief qualifying run prior to the race.

“I don’t think we did anything unsafe with not running on that tyre (prior to qualifying),” he said.

“We’re very experienced on the soft tyre, it’s been on the car for a long time.

“I’m sure there’ll be some reason for it (the failure), but there’s no point speculating on it now.”