The cause of Craig Lowndes’ tyre failure at Pukekohe may never be known due to the nature of the explosion.

Little remained of the outside rear tyre from Lowndes’ car after it came apart in spectacular fashion at over 200km/h on lap 12 of Race 29.

Control tyre supplier Dunlop and V8 Supercars technical staff immediately launched an investigation into the incident, but are yet to determine a cause.

“We’re investigating the cause of the failure on #888,” Dunlop motorsport manager Kevin Fitzsimons confirmed to Speedcafe.com.

“It was a rapid deflation but at the moment the cause is undetermined.”

Fitzsimons and V8 Supercars’ Frank Adamson were this evening seen inspecting sections of the circuit and its kerbing.

Left-rear tyre failures seen at Pukekohe over the last two years were blamed on a combination of the kerbs and teams running low tyre pressures.

Since Bathurst last year, teams have had to run a minimum of 17psi in all four tyres in order to mitigate the risk of failures.

Today’s race meanwhile marked the first for the soft tyres at Pukekohe, debuting with no practice running prior to qualifying.

Teams and drivers approached by Speedcafe.com were however unconcerned by the lack of pre-race running in the wake of Lowndes’ crash.

“The Dunlop soft tyre is pretty good here and I certainly don’t think it was the cause of Craig’s problem,” said Tekno’s Shane van Gisbergen.

“There are sharp edges on the kerbs over the last turn (that are a more likely suspect).”

A single set of soft tyres is again allocated for the 200km Sunday race, where teams generally run the quicker rubber in the first and last stints.

Lowndes’ team is meanwhile racing to repair the #888 Holden for Sunday. 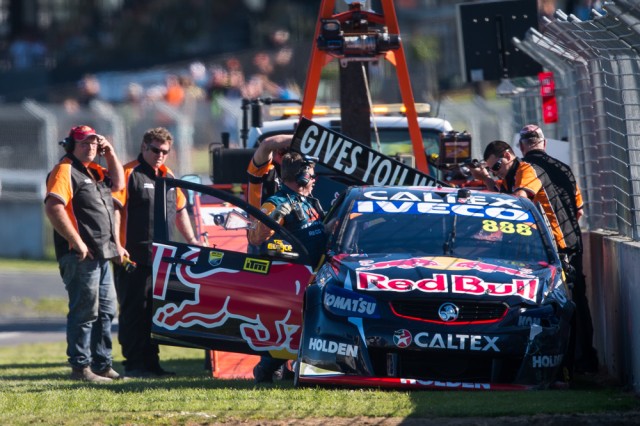 Next Story Reynolds to push Frosty for maiden Prodrive title