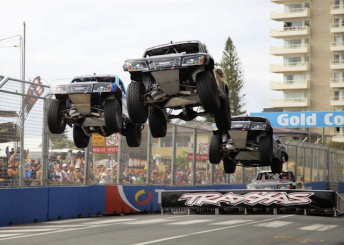 V8 Supercars has confirmed the popular US-based Stadium Super Trucks will be part of the Coates Hire Sydney 500 from December 4-6.

Following on from appearances at the Clipsal 500 and the Castrol Gold Coast 600 V8 events, the Super Trucks will stage races on each of the three days at the Sydney Olympic Park venue.

While the full complement of the Australian drivers list is yet to be revealed to take on the Americans, it is widely expected that Matt Mingay, Paul Morris and Matthew Brabham will be included following their involvement at the recent Gold Coast and Valvoline Speedway events.

“They were a big hit with fans on the streets of Adelaide and the Gold Coast and I’m sure fans will be just as amazed to watch them in action on the streets of Sydney,” V8 Supercars chief executive James Warburton said.

“They are part of what promises to be an exciting finale to the 2015 V8 Supercars championship with great entertainment on and off track.”

Mingay is currently campaigning a Super Truck at the final US event this year in Las Vegas.