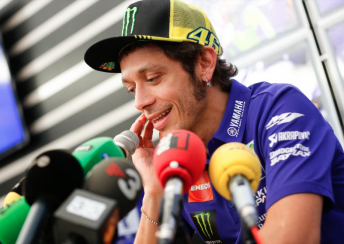 Valentino Rossi says he regrets the move which triggered a controversial clash with Marc Marquez during the Malaysian Grand Prix.

The incident is set to become a contributing factor in the outcome of the 2015 championship with Rossi forced to start this weekend’s Valencia finale from the rear of the grid as punishment.

The Italian, who was issued with three penalty points on his licence by the FIM, failed in his appeal to the Court of Arbitration for Sport to seek a stay of execution from the grid drop penalty.

With his hopes of landing a 10th world title severely damaged, Rossi, who leads Yamaha-team mate and title rival Jorge Lorenzo by seven points, has revealed his regret for his part in the Marquez clash.

However, the championship leader has not given up on trying to claim the 2015 crown.

“Unfortunately I don’t have any other choice,” said Rossi when asked if he had any regrets.

“I just regret going wide and not to follow my normal line.

“Except for that, it’s better that we speak about this weekend.

“The race is very long, 30 laps, when you start last the risk are a lot more, when I will try to recover.

“But it is very early to say, I need to understand my potential.

“I need to do the right choice for setting and tyre choice and see also the conditions and after try to give the maximum and try to recover on Sunday.”

Facing the prospect of potentially missing out on the title, Rossi says the situation has not shaken his commitment to compete in the sport next year.

“For sure my dream was to fight for the championship and after a very good season I can fight, but for sure I will try to fight in a normal situation. For the rest, this situation doesn’t modify my passion or my thinking of the future,” he added.

“I will race next year because I have already the contract and during next year a lot of things will change, so [it will] maybe change also the level – and after I decide to continue or not.”