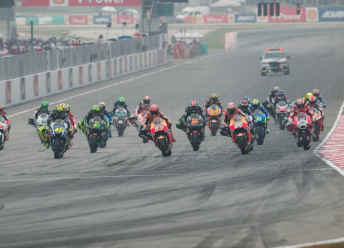 MotoGP bosses have revealed that changes will be implemented next season to avoid further controversies in the wake of the Valentino Rossi/Marc Marquez clash.

FIM president Vito Ippolito and Dorna chief Carmelo Ezpeleta warned riders of their actions both on and off track in an extraordinary meeting, featuring the entire MotoGP field, held prior to this weekend’s Valencia finale.

The controversial clash between Rossi and Marquez at Sepang has seen the sport engulfed in a furore.

In the wake of the incident, Rossi lodged an ultimately unsuccessful appeal to the Court of Arbitration for Sport regarding his sanctions, while stewards have also been criticised.

MotoGP, which is yet to disclose the details of the changes that will take effect next season, have urged riders to put on a clean show this weekend.

“Over the past days, there have unfortunately been some controversies that have surpassed the limits of a healthy passion and, on occasions, logic itself,” read statement delivered by Ippolito and Ezpeleta

“You (the riders) have millions of followers all around the world. They watch and admire your achievements on the track. And they also listen closely to what you say.

“What you do and say could have consequences that are not in keeping with the noble values of our sport.

“We would like to emphasise that for next year, some changes will be made to prevent this from happening again.

“We also want to remind you of the values of our sport: exemplarity, fair play, sportsmanship and courtesy.

“Our officials will be vigilant in observing the fair play and sporting behaviour of every one of you and will be very strict with any infringement of our sporting rules.”