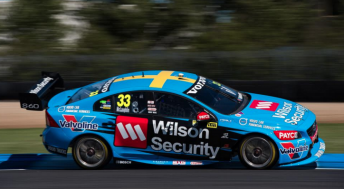 Kiwi Scott McLaughlin raised hopes that he can break his victory drought on home soil this weekend by topping Friday practice at Pukekohe.

McLaughlin, who has not won a race in almost a year, knocked V8 Supercars championship leader Mark Winterbottom from the top spot in the dying seconds of the day’s second 60 minute session.

The Volvo driver’s effort came at the end of a frantic final eight minutes following the resumption from a red flag stoppage.

Walkinshaw Racing’s Lee Holdsworth had set the pace with a 1:03.64s prior to the pause, but was shuffled back to eighth by the chequered flag.

Jamie Whincup was the first to improve on the benchmark before being quickly eclipsed by team-mate Craig Lowndes.

Winterbottom went faster still in his Prodrive Ford before, with the top six all in their garages, McLaughlin stole the show with his 1:03.16s best, which proved 0.18s clear of the field.

“It’s probably the best feeling I’ve had for a long time,” beamed the 22-year-old. 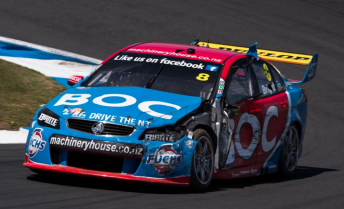 Jason Bright making his way back to the pits

“The car feels good and I’m surprised at the gap but we have got to do it again tomorrow and I’m sure the other guys will come out with faster stuff.

“It’s good for the Kiwis to get a bit of a drawcard for tomorrow. We will give it our best shot and hopefully we can come away with the bacon.”

The day’s only stoppage had been caused by Jason Bright striking the Turn 3 tyre barriers.

Despite left-front damage, Bright was able to reverse out of the wall and drive the car back to the pits.

“We were a little bit wide off (Turn) 1 and through 2 I was wider again,” he explained.

“The rear stepped out just that little bit and I ran out of road pretty quickly.

“The damage doesn’t looked too bad, it’s more panels than anything. I’m sure we’ll be right for tomorrow.”