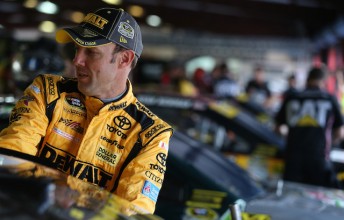 A National Motorsports Appeals Panel has upheld the suspension levied against Matt Kenseth which will see him sit out the next two NASCAR Sprint Cup races.

The panel ruled that Kenseth did not provide enough evidence for his suspension to be revoked however his six-month probation was reduced until the end of this year.

Kenseth was penalised for what NASCAR deemed a retribution attack against Joey Logano.

The panel issued a statement following the hearing which read:

“The original penalty assessed included suspension from NASCAR until the completion of the next two NASCAR Sprint Cup Series events and placed on NASCAR probation for six months following the issuance of the Penalty Notice.

“Upon hearing the testimony, the decisions of the National Motorsports Appeals Panel are: 1. The Appellant violated the rules set forth in the Penalty notice; 2. The Panel affirms and upholds the original Penalty levied by NASCAR.”

Kenseth was eliminated from championship eligibility during the three-race Contender Round, largely through an on-track run-in with Logano at Kansas last month.

Kenseth was spun out by Logano which ended his hopes of an automatic berth in the next round of The Chase.

“I’m more than a little disappointed on the decision and the penalties to start with,” said Kenseth in a statement via his website.

“I’m the first driver in the 65-year history of NASCAR to get suspended for an incident that happened in a Sprint Cup Series race. I feel like I was unfairly made the example. I’m extremely disappointed, but we’ll get through this, and I look forward to going to Homestead.

The 19-year-old Erik Jones will replace Kenseth during his suspension.

Jones has already filled in for a pair of other Joe Gibbs Racing drivers earlier this year in Denny Hamlin and Kyle Busch for his first taste of Cup action.

It will be a busy weekend at Texas Motor Speedway this weekend with him fighting for the truck series title, plus also racing in the XFinity Series.