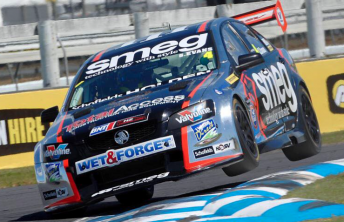 Tim Edgell and Simon Evans emerged as the pacesetters in Friday practice for the second round of the BNT NZ Touring Cars Championship at Pukekohe.

Edgell produced a solid showing in both 20 minute practice sessions resulting in a personal best 1:06.1510s arriving in the opening hit out.

Evans came the closest to surpassing the time but his Practice 2 topping time fell 0.0390s shy of Edgell’s Holden.

The experienced Craig Baird was third fastest on combined times with his best effort, set in opening practice, four tenths off the pace.

Championship leader Jason Bargwanna was fourth in his Toyota Camry with Angus Fogg a tenth further back in fifth, while Mitchell Cunningham’s Ford Falcon was marginally slower in sixth.

Nick Ross, Lance Hughes and Scott Taylor rounded out the top 10 ahead of Saturday’s qualifying session scheduled for 0930 local time.

Ash Blewett edged Reid Harker to the pole in the Toyota Finance TR 86 one make series, while Alexandra Whitley topped the times in qualifying in the SsangYong Ute Racing Series.

The result proved to be a maiden pole position for the multiple Australian karting champion.

Shane Wigston proved to be the class of the field in the Central Muscle Cars as he claimed pole position by 0.6s.