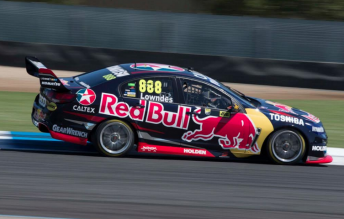 Recent resurfacing work at Pukekohe has failed to smooth out the circuit’s notorious first corner, but the V8 Supercars stars aren’t complaining.

Adjusting to the circuit’s bumps and high kerbs proved a key factor in finding speed throughout the two one hour sessions, the second of which was topped by Volvo star Scott McLaughlin.

The circuit’s bumps have largely remained despite the recent work and a major upgrade that took place ahead of the category’s return in 2013, which saw large sections resurfaced.

“I didn’t notice any difference,” said McLaughlin when asked of the recent patchwork at Turn 1, which starts just after the biggest bump in the near 200km/h right-hander.

“It’s been a year and a half since we’ve been here and maybe I don’t remember what it was like, but it’s as bumpy as I remember it.

“(But) I think it’s good. It’s the character of the track. I don’t think they should change it too much until it starts hurting the cars.”

Craig Lowndes is one of just four drivers to have competed in every Pukekohe V8 Supercars event since the championship first visited the venue in 2001.

“The bumps are the character of the circuit,” he said, having set the third fastest time today behind McLaughlin and Mark Winterbottom.

“The car I had today was one of the best I’ve had in terms of riding the bumps at Turn 1, the kerb at 2 and then the last corners at 9 and 10.

“But I enjoy the bumps in that it gives it character and a challenge. If you smooth out every track there’s really nothing else to work for.”

McLaughlin added that his team’s previous form on bumpy venues gave him added confidence ahead of today’s running.

“The GRM cars have traditionally been good on the street tracks and this is like a big street track with bumps and kerbs,” he said.

“I was pretty comfortable coming here that it (the car) wouldn’t be too bad, especially after the Gold Coast.”

With no pre-marked tyres for the international event, drivers spent the bulk of the day on the single set of new hard rubber that had to be handed back at the end of practice.

A late blast on a set of hards from the race allocation then gave most a preview of their true speed ahead of tomorrow’s final practice and twin qualifying sessions.

The day saw many drivers endure off-track excursions as they explored the limits.

Lowndes was the most frequent offender, with his day including two wild spins through the Turn 5-6 chicane that was added to the circuit in 2013.

“I think everyone is trying to search for the limit,” he explained.

“Making changes to the car all the time makes a difference to where you brake and how you approach some of the corners.

“Turn 5 for me was a bit of a grass-cutter, but it’s just about searching for and pushing the limits. I think we found them.

“At the end the car was reasonably good on a used tyre and when we put the new set on, it wasn’t as good as we’d like it to be, but we only get a couple of chances to get it right.”

Lowndes had a similarly wild Friday at Symmons Plains in March, where he went on to take a double victory on the Saturday.

Next Story GALLERY: V8 Supercars on track at Pukekohe