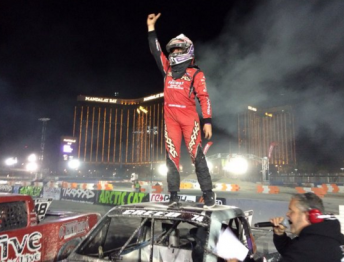 Californian gun Sheldon Creed made the most of his points lead to win the main event and claim the Stadium Super Trucks title at the Las Vegas Village course.

With the positions reversed, Creed began from P1 after finishing the heat in 10th place before conquering the layout set near the iconic Luxor and Mandalay Bay hotels in the Nevada gaming capital.

The teenager, whose career was shaped from a very early age when he began racing quarter midgets after becoming a BMX champion, took the title after 21 rounds were staged during the year.

Gordon came from the back to finish second while Scotty Steele completed the podium.

Earlier, Robby Gordon took out the honours in the heat race from Burt Jenner with Scotty Steele third while Mingay was ninth.