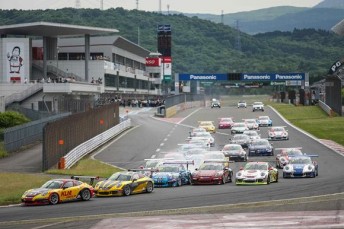 The Asian Carrera Cup Series will host a round in Australia next year when it features on the support bill for the V8 Supercars Sydney Motorsport Park Super Sprint.

Headquartered in Kuala Lumpur,  the one make series is set to make its first trip to Australia where it will join its Porsche Carrera Cup Australia counterpart on the schedule for the August 26-28 event.

Sydney Motorsport Park will play host to round six and seven of the Carrera Cup Asia and the fifth round of Carrera Cup Australia.

Both series will run the majority of the event separately, both awarding points for their respective championships with individual races.

Full details of the race format is yet to be disclosed.

“The combining of the two championships has been a long time coming; the Carrera Cup formula is extremely strong in the Asia-Pacific region and it was only a matter of time before we joined forces for a combined Carrera Cup event,” Porsche Cars Australia Motorsport manager Kurt Sakzewski said.

“As a global formula using identical 911 GT3 Cup race cars, joining Carrera Cup championships is something successfully achieved by other Porsche regions, predominantly in Europe. To bring this to Australia is an exciting prospect”