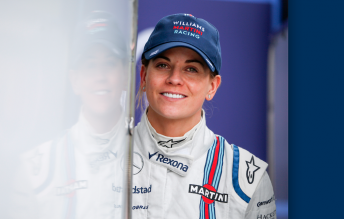 Williams F1 test driver Susie Wolff has announced plans to retire from competitive motorsport at the end of the season.

The 32-year-old became the first women to drive during a Formula 1 grand prix weekend for 20 years when she took part in Practice 1 at the British Grand Prix last year.

Wolff, who enjoyed seven years competing in DTM, became a development driver at Williams in 2012, before landing the role of test driver at the Grove squad last year.

The Scottish driver has made several F1 test appearances while participating in four free practice sessions during grand prix weekends.

“I’d like to thank Williams for the opportunity they have given me over the last few years which has allowed me to achieve my dream of driving a Formula 1 car,” said Wolff.

“It has been great to work with everyone at the team, both at Grove and trackside, and I’d like to thank everyone who has been part of my journey at Williams.

“I am now closing this chapter but looking forward to new challenges in the future.”

Wolff is set to make her final competitive outing at the Race of Champions meeting at Wembley Stadium from November 21-22.