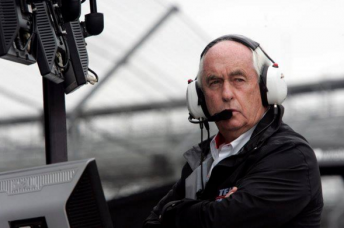 Roger Penske will have his first up close look at the progress of his DJR Team Penske operation in six months when he attends this weekend’s ITM 500 Auckland.

The American billionaire businessman and motorsport legend saw his team take its troubled first steps in the category in Adelaide during March and Perth in early May.

Penske’s hectic schedule has prevented a return until now, where he will combine a trip to the race track with the launch of an Auckland dealership for his trucking empire.

The facility marks a major investment in New Zealand for Penske, sitting alongside a Brisbane outlet as the two showpieces for his Western Star, MAN and Dennis Eagle distributorships in the region.

DJRTP’s Scott Pye-driven Ford will run in MAN colours this weekend to tie-in with the launch.

The team’s managing director, Ryan Story, says the squad is proud of the progress it has made since Penske’s last visit, but recognises there’s still plenty of room for improvement.

Promising speed shown at Sandown, Bathurst and the Gold Coast was tempered by a litany of issues, including a startline error, a mechanical failure-induced accident and an unsafe pit release.

“Certainly we’ve made quite a bit of progress on the car speed front, but unfortunately we don’t have any results to show for that hard work,” Story told Speedcafe.com. 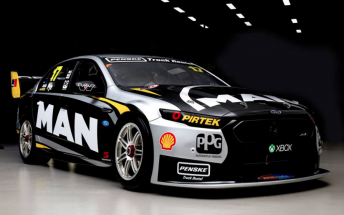 “That’s really what we’re working on at the moment, making sure we execute a race weekend better so that we come home with results we can be proud of.

“We’re conscious of what we need to do to do better. The real challenge is making sure that we follow through.”

Story stresses that Penske is “always watching” one way or another, but admits the presence of the 78-year-old at V8 Supercars events makes for a unique garage environment.

“As much as I’d say we don’t operate any differently, how could you not when you’re in the presence of a legend like Roger?” he said of the 16-time Indianapolis 500 winning team owner.

“Certainly the onus is on us to put on a good show and give him the results that are worthy of his name.”

While Penske will give his own assessment of the squad’s season to date this weekend, Story currently scores it as “about a six out of 10”.

Pye recorded a best of fourth during a mid-year spell of three top six results, but despite the improving speed has finished in the top 10 just once from the last six races.

Barbagallo is described as “absolutely the nadir” as the team struggled for performance while making the first steps in a set-up direction that has ultimately proved fruitful.

“To race a team with Roger’s name on it in front of him so poorly, that was… we all walked away from that with a pretty stern resolve to do better,” reflects Story of Barbagallo. 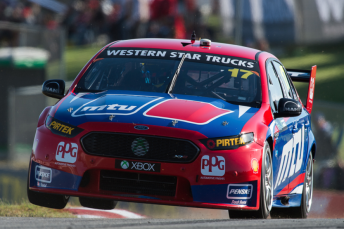 Barbagallo in May proved a tough assignment for DJRTP

“Overall I think the year has been challenging. We’ve obviously had a lot of teething issues along the way, but we’re very conscious of the gains that we’ve made.

“We need to be able to start 2016 in the best possible way and that will happen if we continue to make progress from now until the end of the year.

“The next three events are very important to us and they’re very much a part of our 2016 program.”

Local hero Coulthard is set to join Pye in an expanded two-car assault next year, where expectations will be markedly higher.

Marcos Ambrose, who is yet to make a call on whether he will return to the team next year, will resume his non-driving event role at Pukekohe following his Pirtek Enduro Cup campaign.