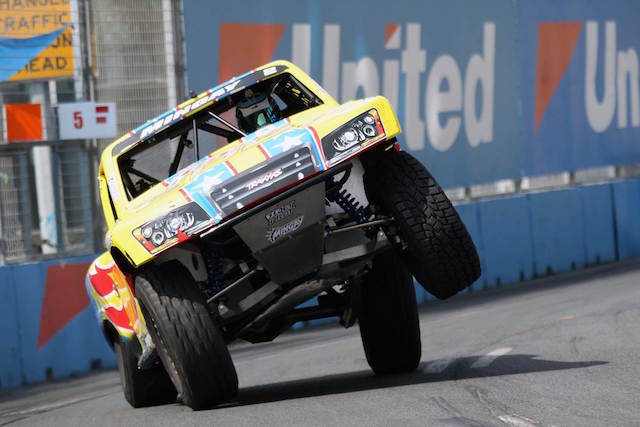 Leading Australian action athlete Matt Mingay is set to continue his association with the Stadium Super Trucks in Las Vegas on November 5.

With the final round of the series set to take place at Las Vegas village, co-inciding with the SEMA Show, Mingay will drive the Freaks 4 Live Truck.

After winning the final race of the Super Trucks’ maiden appearance on the undercard at the Castrol Gold Coast 600 and his follow-up drive in Sydney last weekend, Mingay received a call-up to the Vegas event by team owner Bill Hynes.

“Bill (Hynes) was impressed and said he loved my attitude, the way I conduct myself and my driving ability so it was only natural for me to fill a vacant seat,” Mingay, who first made overtures to run in Las Vegas after his trucks debut in Adelaide earlier this year, said.

“These Stadium Super trucks are the best, and the the people involved are even better.

“I am excited to join the American boys on their home soil to showcase Australia on the international stage.”

The Las Vegas event closes the 2015 season for the North American-based category which has seen the trucks appear three times in Australia – Clipsal 500, Gold Coast 600 and at Sydney’s Valvoline Raceway last weekend.

US star Sheldon Creed leads the points standings on 540 after accumulating seven wins with series founder Robby Gordon on 504 while Keegan Kincaid is third on 444.

Next Story Susie Wolff set to retire from motorsport