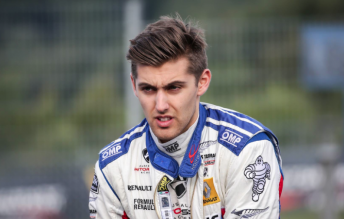 Former Australian Formula Ford champion Anton De Pasquale is turning his back on his open wheel racing to focus on forging a career in V8 Supercars.

A challenging commercial climate in Europe has seen the 20-year-old cut his single seater career short after claiming the 2014 Formula Renault 1.6 NEC title alongside a spell in the Formula Renault 2.0 Eurocup this year.

De Pasquale will now instead concentrate on earning a seat in V8 Supercars and thus abandoning hopes of following Daniel Ricciardo into Formula 1.

Although disappointed to move away from open wheel racing, the Victorian is eager to begin the next chapter of his career, which could see him on the grid in the Porsche Carrera Cup or Dunlop Series next year.

“It is not a bad thing coming back home. We went overseas and had a good crack at it,” De Pasquale, the 2013 Australian Formula Ford champ, told Speedcafe.com.

“Unfortunately we went as far as we could go. We had some good results. We won a championship over there but now I will come back home and try and build a career in Australia.

“We will put the open wheel stuff behind us and focus on how we can find a way into V8 Supercars in the near future.

“Like anything you do no matter where you are in the world racing at the top level is tough.

“It is not like we are coming home and it is going to be easy. We are going to have to put in a lot of hard work and get the results to be able to step up in touring cars.

“Nothing is locked down yet. Porsche is one series we are looking at along with the Dunlop Series so we have got to figure out what our best route is and what is viable.

“I’m happy to go either way they are both really strong categories.”

While open wheel racing has taken a back seat for now, De Pasquale has not entirely ruled out a move back to Europe down the track.

“I will never turn chances to go back overseas but I am concentrating on here now. There are a lot of drivers in V8 Supercars that are doing stints over in Europe in GT.  It is always a possibility.”