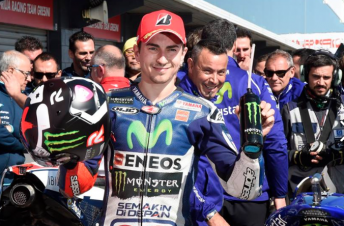 The Court of Arbitration for Sport (CAS) has rejected a request from Jorge Lorenzo to contribute in the review of Valentino Rossi’s penalty for his clash with Marc Marquez.

Lawyers acting on behalf of Lorenzo filed a request for an intervention on Monday which has been rejected, with the CAS stating the matter is between Rossi and the motorcycling governing body FIM.

Rossi lodged an appeal to the high profile Switzerland court in a bid to overturn the three penalty points he received as punishment for the incident with Marquez at Sepang.

The Italian’s hopes of landing a 10th world title have been dented with the penalty demoting Rossi to the back of the grid for Sunday’s Valencia finale.

“Earlier today, the Court of Arbitration for Sport (CAS) rejected a Request for Intervention filed by the Spanish MotoGP rider, Jorge Lorenzo,” read a statement from the CAS.

“On 2 November 2015, lawyers acting for Jorge Lorenzo filed a Request for Intervention in order to be able to participate on his behalf in the CAS arbitration between Valentino Rossi and the FIM.

“This afternoon, the CAS informed the parties that Mr Lorenzo’s request was denied. Accordingly, the CAS arbitration will continue between Valentino Rossi and the FIM only.

“The decision on Mr Rossi’s request to stay the execution of the FIM Steward’s decision is still expected to be issued no later than 6 November 2015.”

Rossi holds a seven point lead over Lorenzo heading into the title decider on Sunday.

Next Story Rossi hoping for fair title fight in Valencia